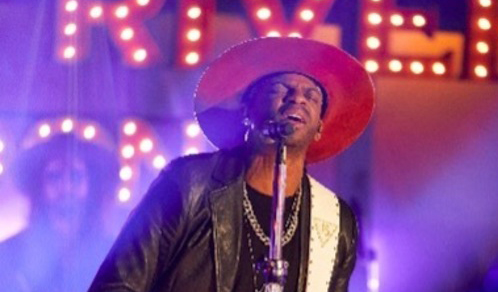 Jimmie Allen Rings In New Year With 4th Number One

Jimmie Allen is kicking off 2023 on top, with his single “down home” hitting No. 1 on the Country Aircheck/ Mediabase charts. The accolade marks Allen’s fourth career No. 1 song. “down home” is also Country radio’s first No. 1 of 2023.

The song was released March 2022 via Stoney Creek Records/BBR Music Group as the lead single from Allen’s third album Tulip Drive and takes shape as a letter to his late father James, who passed away in 2019. Listen to “Down Home” above.

Allen took to social media with some words of gratitude surrounding the achievement: “Dear Dad, I knew you existed and now the world knows too. Thank you to Country radio for helping me share the memory of my father through this song. My [co-writers] Cameron Bedell, Tate Howell and Rian Ball, I’m thankful to y’all for pushing me to do this song but I also thank you for being patient and writing it with me when I was emotionally ready… To every person that listened to this song, thank you. I read every message about how this song related to you and the person you lost. I’m sending love and peace your way in dealing with your loss.”

The track’s poignant music video was co-directed by Allen and hot between his hometown of Milton, DE and nearby Lewes, DE to keep the spirit of his relationship and memories created with his late father alive, featuring many locations vital to Allen and his father’s enduring connection – Allen’s childhood home, the baseball field his father taught him how to play on, and his father’s favorite restaurant, among others.

Allen most recently performed “down home” on New Year’s Eve Live: Nashville’s Big Bash on CBS, in addition to co-hosting the star-studded celebration live from Nashville’s Bicentennial Park alongside Elle King & Rachel Smith to ring in the new year.

New Year’s Eve Live: Nashville’s Big Bash also featured Allen joining forces with Flo Rida for the broadcast premiere performance of their collaboration “No Bad Days,” which was released December 16. American Songwriter praised the track as a “feel-good foray into the country rap canon,” while CMT hails it “a whistle while you work collaboration that we never knew we needed until now.” Listen to “No Bad Days” below.

Rounding out his robust start to the new year, Delaware State University announced that Allen will serve as the keynote commencement speaker for the undergraduate ceremony on May 12. International President of Alpha Phi Alpha, Willis Lonzer, will keynote the Graduate ceremony.

“Delaware State University is where I am proud to say I attended. I met lifetime friends there and learned so much about who I am as a Black man, and navigating my way through life,” said Allen of the news. “I’m honored to be the keynote speaker and hope I can share something that will inspire the next generation of leaders. Thank you to President [Tony] Allen and the rest of the DSU family for having me. Let’s go HORNETS!!”

Delaware University President Tony Allen (no relation) plans to nominate Allen to receive his Honorary Degree at the undergraduate ceremony and was excited about the prospects of both featured speakers. He notes, “Our vision at Delaware State University is to be the most substantively diverse, contemporary and unapologetic HBCU in the nation. Doing so requires a noted and continuous clarion call from anyone touched by the Delaware State University experience. Both Jimmie and Dr. Lonzer are tremendous examples of that tradition and I am proud that each will have the opportunity to impart their story and wisdom to what will be the largest graduating classes in Delaware State University history.”

Allen will return to the road as special guest for all dates of superstar Carrie Underwood’s The Denim & Rhinestones Tour including a stop at the Bridgestone Arena here in Nashville. GET TICKETS HERE.

Music editor for Nashville.com. Jerry Holthouse is a content writer, songwriter and a graphic designer. He owns and runs Holthouse Creative, a full service creative agency. He is an avid outdoorsman and a lover of everything music. You can contact him at JerryHolthouse@Nashville.com
Previous Becky Isaacs Recovering From Car Accident
Next LISTEN: Channing Wilson’s “Sunday Morning Blues“