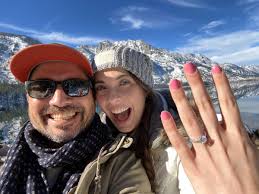 On Oct. 28, singer/songwriter Jenny Tolman added a new vignette to her life story when longtime boyfriend and GRAMMY nominated producer Dave Brainard dropped to one knee and asked her to marry him. Fittingly, the pair got engaged by Jenny Lake at the base of the Grand Tetons in Jackson Hole, Wyoming.
“I was so surprised by the whole thing. I had no idea Dave was going to propose, so I hadn’t even gotten my nails done,” Jenny enthuses. “He put his whole heart into the proposal and it was the most perfect moment I could’ve ever imagined – chipped nail polish and all!”
The pictures are thanks to screenshots from the sneaky video Brainard set up on his iphone. Luckily, he captured Tolman’s elated reaction when she said ‘yes!’
Inspired by her heroes Roger Miller and Shel Silverstein, native Nashvillian Tolman is a modern-era troubadour who enjoys poking fun in rhyme. Her latest single, “Invent a T-shirt,” features The Grand Ole Opry Square Dancers. (Watch below) Tolman says she wrote “Invent a T-Shirt” with Brainard and Bill Whyte “because [given the way 2020 has unfolded] we all need to stick a pin in our tension balloons and take a second to laugh at ourselves.”

Music editor for Nashville.com. Jerry Holthouse is a content writer, songwriter and a graphic designer. He owns and runs Holthouse Creative, a full service creative agency. He is an avid outdoorsman and a lover of everything music. You can contact him at JerryHolthouse@Nashville.com
Previous PREMEIRE: Reckless Johnny Wales’ “If Climate Change Don’t Change Your Mind”
Next National Museum Of African American Music Opens Jan. 18