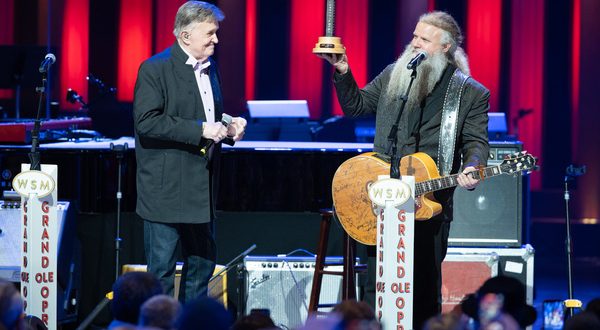 Jamey Johnson became an official member of the Grand Ole Opry last night, welcomed by Opry member and Johnson’s mentor Bill Anderson after the two collaborated on their ACM and CMA Award-winning co-write “Give It Away.”

Anderson stepped into the circle holding the Opry member award he would present to Johnson and reflected on the night of his surprise invitation in March. He asked Johnson what the night has felt like. “I’ve been talking about this moment since I was a kid,” shared Johnson. “I prayed for it every day and hoped it would come.” Anderson replied, “Well this is proof our prayers do get answered.”

The show concluded with a collaboration on the hymn “Near The Cross” between Johnson and Ricky Skaggs, who celebrated his 40th anniversary as an Opry member as Johnson marked his induction. “I know exactly how Jamey feels tonight; that was me 40 years ago,” said Skaggs. “I want to thank my precious wife Sharon and The Whites for being here. We can’t do this without family.”
Johnson first attended the Opry in 1999 while in town for a job interview. He had the privilege of being a backstage guest on that night as Bill Anderson, Little Jimmy Dickens, and Porter Wagoner performed. Johnson first performed on the Opry stage on September 10, 2005 and knew as he walked into the backstage artist entrance he wanted to be a member someday. Johnson noted the experience as surreal, having grown up listening to the Opry with his father. His daughter was one at the time of his debut appearance; she will graduate from high school next week.

Music editor for Nashville.com. Jerry Holthouse is a content writer, songwriter and a graphic designer. He owns and runs Holthouse Creative, a full service creative agency. He is an avid outdoorsman and a lover of everything music. You can contact him at JerryHolthouse@Nashville.com
Previous LISTEN: Trey Lewis’ “Whatever She Sees in Me”
Next 2022 Americana Honors & Awards Nominees Announced