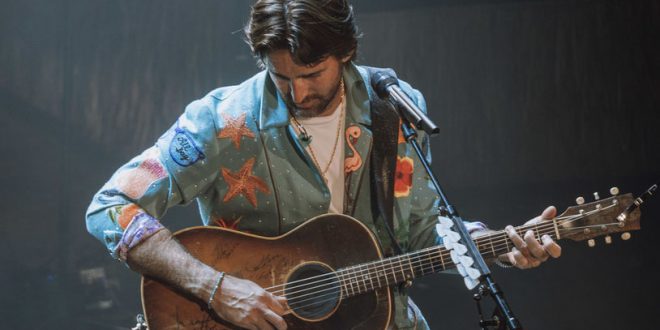 Jake Owen Headlines Ryman Show For A Good Cause

Jake Owen hosted a special one night only celebration at Ryman Auditorium Thursday night to benefit the CMA Foundation. Marking his first headlining show at the Mother Church, Owen instantly brought the sold-out crowd to their feet.

Inviting some of his close friends to join the stage with him, Owen performed a setlist full of moments only unique to JAKE OWEN & FRIENDS: A CONCERT MADE FOR YOU. Duetting with legendary hitmakers Travis Tritt on “It’s a Great Day to Be Alive” and David Lee Murphy on “Anywhere With You,” accomplished songwriters Jaren Johnston on “Beachin’,” and Kendell Marvel on “Startin’ With Me,” Owen lit up the stage even more with chart-toppers including “The One That Got Away” and “I Was Jack (You Were Diane).” Newcomer Larry Fleet kicked it all off with a standing ovation.

The special guests weren’t the only surprises in store. Owen presented songwriters Joey Hyde, Neil Medley, and Benjy Davis with their first ever No. 1 plaques for penning his NINTH career #1, “Made For You.” With chart success in the United States, Canada and Australia — “Made For You” marked the first time Big Loud Records ever had a multi-week #1 single on both the Billboard Country Airplay and Country Aircheck/Mediabase charts.

Also recognizing “Barefoot Blue Jean Night” as the most played song of the decade, Owen exclaimed “Thank you for changing my life,” as he gave the writers of the double platinum single plaques to commemorate the incredible feat. Penned by Dylan Altman, Eric Paslay and Terry Sawchuk, the hit led all songs with almost a half million plays and more than 1.5 million points at Country radio in the 2010 decade.

Staying true to his philanthropic ways, Owen donated the proceeds from the special night to CMA Foundation for their efforts to improve and sustain high-quality music education programs across the US, as they work to ensure every child has the opportunity to participate in music.

“First, thank you so much Jake for believing in the CMA Foundation,” says Tiffany Kerns, CMA Foundation Executive Director. “We are an organization that believes that every child in the United States deserves to have access to music education. Why? Because wonderful human beings like Jake cut their teeth on music inside of a classroom. Because a music teacher believed in them, because the community rallied, and because music makes a difference in our lives. How many of us would have survived the pandemic without music? Exactly. So, we cannot allow our students to not have access to music education. So, every ticket tonight is going to support students all across the country.”

Owen’s set was not only on-brand with his Tiki Tonk persona, but his whole ensemble was fit to theme. The Florida native was outfitted in custom Manuel, flashing his turquoise leather jacket full of beachy emblems paired with his studded turquoise boots to match.

“It was a dream like evening last night,” says Owen on Instagram on Friday night. “Sold out crowd at the Ryman and doing a good thang for CMA Foundation…Just want to personally thank all of my friends again for coming out last night and sharing that stage with me. And thanks for all my friends that filled those church pews. Love y’all.”

Music editor for Nashville.com. Jerry Holthouse is a content writer, songwriter and a graphic designer. He owns and runs Holthouse Creative, a full service creative agency. He is an avid outdoorsman and a lover of everything music. You can contact him at JerryHolthouse@Nashville.com
Previous Jason Aldean Scores His 25th #1 Single
Next WATCH: Fences & Billy Strings Collaborate On ‘Globe’