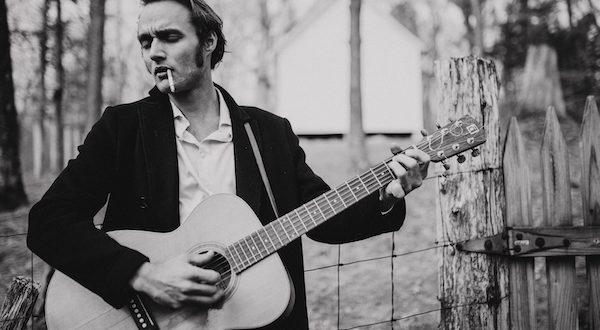 Fate stated, “I met a woman at a coffee shop I frequented in Paris, TN. She was a bit older than me, but we hit it off and talked for a while. She was a preacher and had children. Suffice it to say: I was ill-suited to court her, being an itinerant musician and all. Nonetheless, we had sparked each others’ interest, and I left the encounter with a challenge from her: if I could write a song, then I should write her a sermon. So, I went home and wrote the song.”

The new album was released via new Kentucky record label, Slough Water Records after Fate built a strong fanbase in Murray KY, where he briefly settled after a youth spent on the road, Fate now shows he is a wandering star on the rise, landing the support of media including Wide Open Country and American Songwriter, who described Fate as “a dark, brooding folk rocker with hints of Nick Drake and the War on Drugs”.

Fate began his music career with a pick-worn guitar he bought from a pawn shop, busking the sidewalks of Denver, Austin, New Orleans and Nashville and working side jobs when he could. One day a laborer, the next a carpenter, the next a valet. He spent time as a deckhand on the lineboats that took him up and down the Mississippi River. Equally restless and observant – Fate was always mindful of his interactions with everyone he met, who came from all walks of life. Their lessons, wisdom and experience spilled into the songs that became Diesel Palomino the follow up to his 2017 self release record, Little Bill and the Late Fees.

The new album also shares tales of personal tragedy, loss, growth and inner reflection. At times a dark interpretation of a contemporary Mid-South existence, his sharp witted vignettes are often autobiographical, based on events from his turbulent childhood and formative teenage years. From the sun-beaten car carrying strung out, heartbroken characters across the desert (“Stars of Tucumcari”) to a coquettish encounter with a religious woman (“Preacherwoman Blues”), Fate draws on life experiences that seem enriched and testing beyond his 26 years.

Another influence on the record is the impact and lessons Fate learned from the early loss of his father Eric McAfee. Fate spent most of his life estranged from his father who struggled with addiction and passed after a battle with cancer. A former beatnik poet and war photographer, working in Bosnia during the civil war, Fate included some of his father’s photos in the album artwork.

Discussing using his father’s photography on the record Fate stated:

“I felt a strong desire to use my father’s photographs in the album artwork because I believe they reinforce the musical theme of a tattered, dispersed memory. Individually, I find the photos suggestive of fragility, change, potential, and even excitement. Collectively, they seem to weave an ambivalent mystery which mirrors the lyrical content of the title track. The unknown origins or exact locations of the photos added to the mystique, but knowing that he was the photographer was relevant to the struggle explored in the album. This offered a type of catharsis to the trials inherent to his passing, and this concept of remaining conjoined with the dead, in a sense, is expressed in the photo behind the record.”

Fate will be making several stops in Tennessee including Nashville at the East Room on 3/21 and Murfreesboro at Media Rerun on 2/7.

Music editor for Nashville.com. Jerry Holthouse is a content writer, songwriter and a graphic designer. He owns and runs Holthouse Creative, a full service creative agency. He is an avid outdoorsman and a lover of everything music. You can contact him at JerryHolthouse@Nashville.com
Previous Rising Star Ivory Layne At The High Watt Tomorrow 3/8
Next The Black Keys are Back with First New Music Since 2014