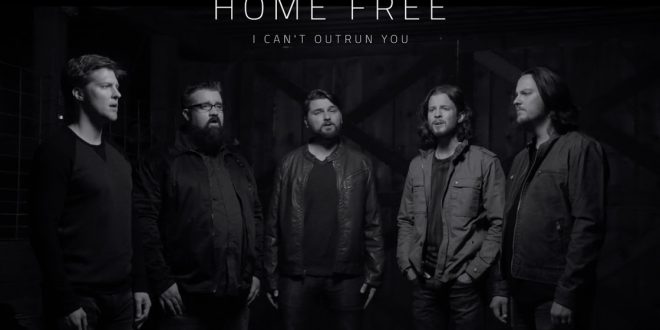 In the midst of their whirlwind TIMELESS WORLD TOUR and hot on the heels of their latest album release, HOME FREE continues to demonstrate their diverse and captivating all-vocal stylings as they debut their latest cover video today (10/23), “I Can’t Outrun You.”
The group’s baritone Adam Chance directed the video and developed the concept that follows the ghosts of a lost love, and is featured on lead vocals throughout the track. Longtime collaborator and editor Jimmy Bates shot the heart-wrenching clip on location near Sweet Home, OR.
Originally recorded by Trace Adkins, “I Can’t Outrun You” is featured on the group’s dynamic new album TIMELESS, which debuted at #2 on the Billboard Top Country Albums chart. The somber arrangement was developed in collaboration with producer Darren Rust.
Watch Home Free’s chilling “I Can’t Outrun You” video here.
Following a weekend of sold-out TIMELESS WORLD TOUR performances in Texas, Chance and bassist/Nederland, TX native Tim Foust spent Monday (10/16) visiting Little Cypress-Mauriceville and Orangefield Middle Schools, whose music programs benefitted from the group’s YouCaring campaign that was established following Hurricane Harvey.
The charitable fund began with a $20,000 donation from the band. Fans were challenged to match the initial donation, which they did in less than 12 hours. Giving now tops more than $87,000.
Chance and Foust also stopped in at the Southeast Texas Food Bank, which received a $15,000 donation, estimated to provide 45,000 meals to the area. All remaining funds will be donated to the Nederland Church of Christ Disaster Relief Fund.
For more information on Home Free, visit www.homefreemusic.com.
Follow Home Free on Facebook, Instagram, Twitter and YouTube.
About Home Free:
Since being crowned NBC’s The Sing-Off victors, all-vocal quintet Home Free has made their mark on the music scene selling more than 250,000 copies combined of their popular albums, embarking on four major national tours and amassing over 184 million YouTube views. In 2016, FULL OF (EVEN MORE) CHEER – an expanded version of their popular holiday album, FULL OF CHEER – debuted at #2 on Billboard’s Top Country Albums chart, cementing the band as Country music’s top all-vocal entertainers. The release of their third studio album, COUNTRY EVOLUTION, elevated the band “from auxiliary entertainment to headlining attraction” (Times Leader) and hit #4 on Billboard’s Top Country Albums chart. Produced by Darren Rust, the deluxe version includes five originals and nine new renditions of hit songs that showcase the band’s undeniable talents, tight harmonies and intelligent arrangements that are uniquely their own. Home Free’s breakout debut album CRAZY LIFE (2014) hit #1 on iTunes Country chart and #4 overall. Their latest project TIMELESS hit shelves September 22. Founded in 2000 during collegiate years, the five-man band from Minnesota has been electrifying crowds with their live show for nearly a decade, performing together for packed audiences at major festivals, fairs, colleges and theatres. Their extensive touring and reputation as extraordinary showmen has built a loyal fanbase while bringing their homegrown Country style into the national spotlight.

Stars Get Together For Good Cause

Lauren Alaina has announced her 2022 headlining tour. Alaina will kick off her Top of …

Amy Grant & Vince Gill Christmas at the Ryman – Get TICKETS!