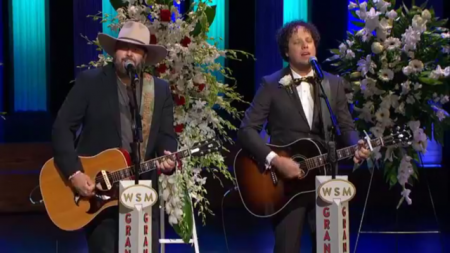 Country music duo Halfway to Hazard paid tribute to the late Troy Gentry yesterday when they performed during his memorial service at the Grand Ole Opry House in Nashville. Chad Warrix and David Tolliversaluted their longtime friend and fellow Kentuckian with an acoustic performance of “My Old Kentucky Home.”
“Troy was our brother, our mentor and our friend. He always said ‘you’re gonna play the Opry, I’ll make it happen,'” says Tolliver. “He made it happen. Not like Chad or I wanted but he kept his word. I can’t describe the emotions that went through me yesterday but I had a peace inside, it was like Troy was giving us one last gift. I’ll miss him and his smile.”
Warrix adds, “Playing Troy’s service at the Opry House was one of the most emotional experiences we’ve ever been involved with. The low of losing a close friend and musical peer along with the high of playing the the venue that sits at the very top of everyone’s list was very intense. Not to mention, seeing the whole Montgomery Gentry band, crew, country music legends and of course Angie, Kaylee and Taylor and the rest of the Gentry family in the audience. I just tried to focus on honoring T as a fellow proud Kentuckian and to maybe give the family some comfort with a song that is so special to all us prideful folks from the Bluegrass State. I never imagined playing on the Opry stage under these circumstances, but I also never imagined spending the next years of my life without Troy in it either. I am thankful for the gift of his friendship and mentorship and the gift of being on stage with him one last time. His hard work through all the years that got him into the Opry family is a true testament that has inspired me to work harder and be a ‘Better Me.'”
Gentry, one-half of country music duo Montgomery Gentry, was tragically killed in a helicopter accident in New Jersey last Friday. He was 50 years old.
About Halfway to Hazard
Halfway to Hazard is an American country music duo composed of singer-songwriters David Tolliver and Chad Warrix. Though Tolliver and Warrix grew up in different towns in southeastern Kentucky, their group originated in Hazard, Kentucky, which was halfway between their hometowns. The group’s debut album, Halfway to Hazard, peaked at #14 on the Billboard Country Albums chart, landing them a Top 20 album straight out of the gate. Byron Gallimore and country music superstar Tim McGraw co-produced the project. Included on the album was their debut single, “Daisy,” which earned them a Top 40 hit on the Billboard Hot Country Songs chart in 2007. As a songwriter, Tolliver has penned songs that were later recorded by Tim McGraw, Brantley Gilbert, Jerrod Niemann, and more.
For more information on Halfway to Hazard, visit halfwaytohazard.com.