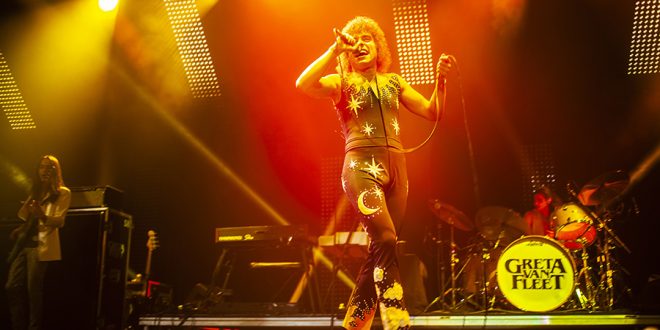 Greta Van Fleet will embark on a series of specialty events, “Strange Horizons” — their only headline shows in 2021—at venues including FirstBank Amphitheater in Franklin TN beginning later this summer. These limited engagements follow the band’s extensive touring history, which saw them sell 1 million+ tickets in five continents over the span of three years.
“It is truly a monumental time in history to be able to perform again,” the band shares, “We are honored to experience these special shows with all of those who will be in attendance. Let us, once again, come together & celebrate the privilege of life!”

The Battle at Garden’s Gate explores the boundaries of the group’s artistry and reflects heavily on the individual members’ personal and spiritual growth during their rapid rise. “There was a lot of self-evolution happening during the writing of this album that was prompted by experiences I had, experiences we all had,” explains vocalist Josh Kiszka. “It’s reflecting a lot of the world that we’ve seen, and I think that it’s reflecting a lot of personal truth,” says guitarist Jake Kiszka.

Music editor for Nashville.com. Jerry Holthouse is a content writer, songwriter and a graphic designer. He owns and runs Holthouse Creative, a full service creative agency. He is an avid outdoorsman and a lover of everything music. You can contact him at JerryHolthouse@Nashville.com
Previous Watch: Charlie Worsham’s “Believe In Love”
Next Prine Family Announces “You Got Gold: Celebrating the Life & Songs of John Prine”