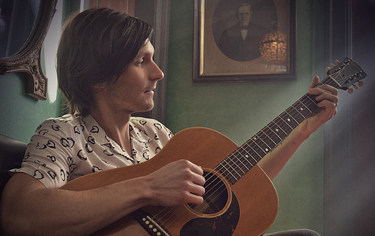 Charlie Worsham’s new song, “Believe In Love,” is out today via Warner Music Nashville. (Watch above) Reflecting on the song, Worsham shares, “‘Believe In Love’ takes me to Worsham Service Center, to stopping by after school and visiting with my Nanny and Papaw, who ran the shop. It takes me to dozing off in the pew of Emmanuel Baptist Church on a Sunday morning, my mom letting me nap during the sermon. It takes me through all the great dogs our family has known. These are the landmarks, the road map I was sent into the world with, from a family and community that raised me to know and value love. And most importantly, it was these landmarks that steered me to Kristen, marriage, and parenthood. I’m now in that chapter of life where I get to help map out new landmarks for our son as he grows up. ‘Believe In Love’ is where I’ve been, where I am, and where I’m going.”

Produced by Jay Joyce and written by Worsham and Jimi Bell, “Believe In Love” is Worsham’s second new release this year following “Fist Though This Town.” In celebration of the new songs, Worsham will perform at Nashville’s Grand Ole Opry tomorrow night and, following his own set, will also join Leslie Jordan as part of his Grand Ole Opry debut.

Since the release of his 2013 debut, Rubberband, Worsham has established himself as one of Nashville’s most beloved and well-respected artists. In addition to his own music, he’s a frequent collaborator including work with Dierks Bentley, Eric Church, Brandy Clark, Luke Combs, Vince Gill, Kacey Musgraves, Marty Stuart, Carrie Underwood and Keith Urban among several others. He also earned a nomination for Specialty Instrument Player of the Year at the 55th ACM Awards and has toured extensively across the world including numerous shows performing as of part of Old Crow Medicine Show as well as dates with Miranda Lambert, Little Big Town, Kenny Rogers, Lee Ann Womack, Tim McGraw and Faith Hill.

Music editor for Nashville.com. Jerry Holthouse is a content writer, songwriter and a graphic designer. He owns and runs Holthouse Creative, a full service creative agency. He is an avid outdoorsman and a lover of everything music. You can contact him at JerryHolthouse@Nashville.com
Previous Songwriter Hall Of Famer Kent Blazy Drops New Album
Next Greta Van Fleet Making A Stop In Franklin On Limited Tour