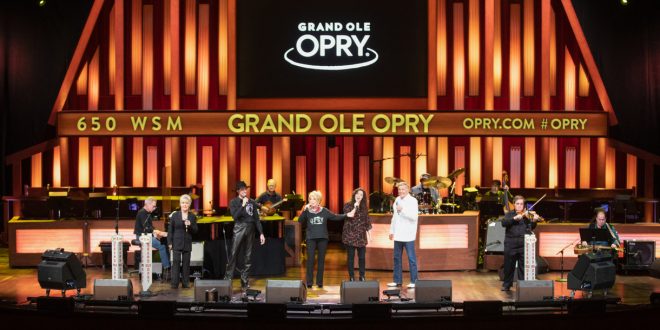 Grand Ole Opry to Broadcast LIVE on Circle This Saturday

With a resilience based on the determination of its Opry members and other country music greats, the Grand Ole Opry will keep its traditions and music alive as it hosts its 4,916th consecutive Saturday night broadcast this Saturday, March 21. Circle, the new country music and lifestyle television network that went on the air January 1, will broadcast the show LIVE on air in their local markets for the first time since debuting Opry, a new weekly, live-recorded, one-hour TV program earlier this year. Opry fans can also stream it online at Circle All Access on Facebook or at Circle All Access on YouTube starting at 7 p.m. CT / 8 p.m. ET.
Last week, amid the concerns of the COVID-19 virus, the Opry paused all shows with a live audience through April 4 but vowed to continue its nearly-100-year radio broadcast history. Nearly half a million fans last Saturday were able to video stream or listen to Opry members Bill Anderson, Jeannie Seely, and Connie Smith, and others perform acoustically from the Opry Circle.
Embracing today’s technology, the Opry can be broadcast and streamed with a very small production team of people and very limited number of artists performing acoustically on the Opry stage.
Fans around the world can also tune-in to the broadcast on the Opry’s flagship radio home, 650 AM-WSM and several other outlets.

Music editor for Nashville.com. Jerry Holthouse is a content writer, songwriter and a graphic designer. He owns and runs Holthouse Creative, a full service creative agency. He is an avid outdoorsman and a lover of everything music. You can contact him at JerryHolthouse@Nashville.com
Previous Rising Star Gabby Barrett Makes History
Next Sara Evans Covers Classic Hits On “Copy That”