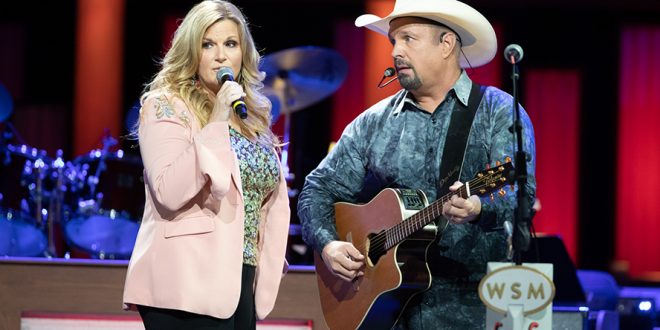 The show opened with more than a dozen Opry members announcing via video in the screen of the Opry’s signature barn backdrop, “Live from Nashville, Music City, USA, this is the 5,000th Saturday night broadcast of the world-famous Grand Ole Opry!” The first musical selection of the night celebrated Opry pioneers who heard the Opry on the radio then brought the musical styles from their regions of the United States to the Opry stage. Among the opening songs featured were “Wabash Cannonball,” “Jambalya,” “San Antonio Rose,” “Blue Moon of Kentucky,” “Coal Miner’s Daughter,” and “The Devil Went Down to Georgia” as performed by Bill Anderson, Connie Smith, The Gatlin Brothers, Darius Rucker, Terri Clark, and Chris Janson, respectively. The next two hours featured a mix of country music styles celebrating the past, present, and future of country music and led to show closers Garth Brooks and Trisha Yearwood, who offered several of their biggest hits and a duet on “In Another’s Eyes.”

WSM Radio began to air the show that would become the Grand Ole Opry in 1925 before expanding to television and eventually digital streaming platforms. The Opry has been on the airwaves longer than any other broadcast program of any medium anywhere in the world and has continued to produce original shows for 5,000 Saturday nights through the Great Depression, World War II, two Nashville floods and, most recently, a global pandemic.

Music editor for Nashville.com. Jerry Holthouse is a content writer, songwriter and a graphic designer. He owns and runs Holthouse Creative, a full service creative agency. He is an avid outdoorsman and a lover of everything music. You can contact him at JerryHolthouse@Nashville.com
Previous MORE Performers added to CMA Awards 2021
Next Bill Anderson Exhibit Will Open At HOF On Dec. 3