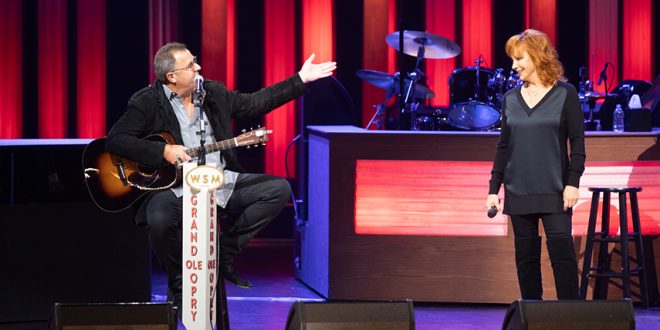 When some of today’s top country music superstars take the stage Sunday night (8 p.m. Central) on NBC’s “Grand Ole Opry: 95 Years of Country Music” special, they’ll be joined by their present-day contemporaries and nine decades of fellow Opry stars thanks to the Opry’s vast photo and video archive collection. The Opry’s archive, which houses thousands of hours of footage and a photograph collection quickly approaching one million images spanning all 95 years of Opry history, contributed more than 100 still images and more than 125 video clips to the special featuring everyone from early icons including Roy Acuff, DeFord Bailey, Minnie Pearl, and Bill Monroe to today’s roster of more than 60 members.

Archival packages are set to include a look at the Opry’s resilience through World War II, the flood of 2010, and the ongoing pandemic as well as a review of Opry collaborations through its history including Trace Adkins and Loretta Lynn, Vince Gill and Reba McEntire, Chris Janson and Keith Urban, and more. Prior to watching as Darius Rucker invites his friends in Lady A to become Opry members, the special features a look into the archives of past member invitations featuring an array of artists including special hosts Brad Paisley and Blake Shelton as well as Bill Anderson, Terri Clark, Jimmy Dickens, Vince Gill, Little Big Town, Craig Morgan, Jeannie Seely, Rhonda Vincent, Steve Wariner, Chris Young, and more.

In addition to Sunday’s night’s “Grand Ole Opry: 95 Years of Country Music”, the Opry archives has contributed to other programming including “Country Music: a Film by Ken Burns”, “Kennedy Center Honors”, and NFL Films “A Football Life”, among dozens of others.

Music editor for Nashville.com. Jerry Holthouse is a content writer, songwriter and a graphic designer. He owns and runs Holthouse Creative, a full service creative agency. He is an avid outdoorsman and a lover of everything music. You can contact him at JerryHolthouse@Nashville.com
Previous Guy Clark Documentary To Premiere At 2021 SXSW
Next Merle Monroe Releases “I’m Leaving Town Tonight”