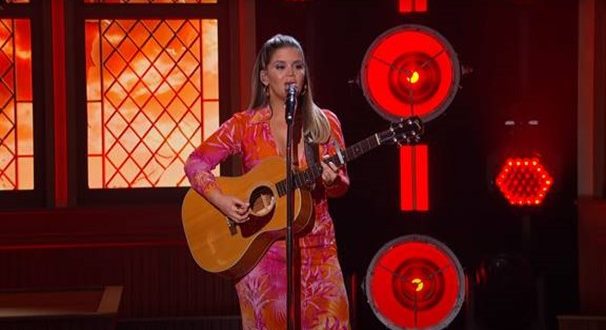 2020 ACM Award-winner for “Female Vocalist Of The Year,” Maren Morris performs “To Hell & Back” on her Gibson LG-2 American Eagle at the Ryman Auditorium.

Gibson guitar players took centerstage in the heart of Nashville at iconic venues throughout the city including the Grand Ole Opry House, the historic Ryman Auditorium and The Bluebird Café, for the 55 th ACM Awards show.
Headquartered in the heart of downtown Nashville, the iconic, American-made instrument brand, Gibson has been  creating, inspiring, and  contributing to the ‘share of sound’ for 126 years. After more than a century, Gibson artists, players and fans continue to experience the #1 guitar brand rejuvenated.  Gibson is played by the best and brightest artists , across generations and genres and has emerged as the  most relevant, most played , and  most loved guitar brand around the world.
“During such a challenging era, it’s great to see the power of music cut through at the recent ACM Awards,” says James ‘JC’ Curleigh, President and CEO of Gibson. “Nashville, Music City USA, is the perfect backdrop to showcase all of the amazing country musicians and we are very proud of our awesome Gibson and Epiphone artists, especially, Luke Combs and his support of Guitars4Vets with Gibson Gives.”
In a nod to healing through the power of music, ACM Award-winner for “Album Of The Year” and “Male Artist Of the Year” Luke Combs, Gibson and Ford have teamed up tosupport U.S. veterans through Guitars4Vets –which provides veterans with guitars of their own and a forum to learn how to play. In the clip, Luke Combs visits a group of veterans during a Guitars4Vets guitar lesson. Luke delivers a Ford pickup truck filled with customized Gibson G-45 Standard Acoustic guitars wrapped with the Ford “Proud to Honor” logo. The teaser and multiple commercials featuring the G-45 guitarsdonated by Gibson , debuted during the 2020 ACM Awards on CBS . To learn more about “Proud to Honor,” go to: www.fordproudtohonor.com and donate directly to Guitars4Vets here. Watch the new “Proud To Honor” clip with Luke Combs featuring Gibson guitars HERE .

Music editor for Nashville.com. Jerry Holthouse is a content writer, songwriter and a graphic designer. He owns and runs Holthouse Creative, a full service creative agency. He is an avid outdoorsman and a lover of everything music. You can contact him at JerryHolthouse@Nashville.com
Previous Wild Feathers To Release “Medium Rarities” Nov. 20th
Next WATCH: Chris Stapleton’s “Starting Over” Video