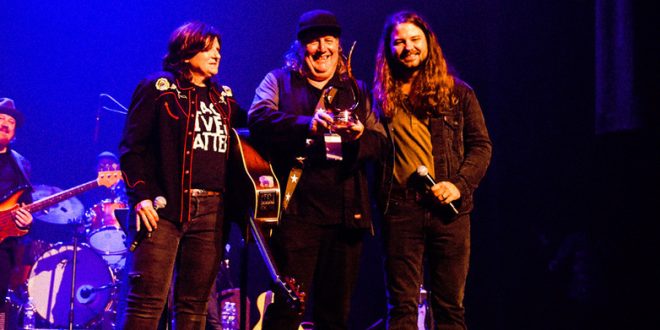 “Georgia On My Mind” Returns To The Ryman

The 9th Annual “Gretsch Presents Georgia on My Mind” benefit concert, hosted by Brent Cobb and Indigo Girls’ Amy Ray, made its return to the Ryman Auditorium last night, after two years of virtual shows due to the pandemic.

“What a knockout musical event celebrating kinship, friendship and connections to Georgia,” says Lisa Love, director, Georgia Music Foundation. “We are humbled to be so embraced in Nashville and able to go spread this love back home in the form of music education grants.”

Amy Ray says, “Kevn really helped out Indigo Girls in the early days. He shared gigs in Athens, which was a super hard scene to break into, and he validated our path as an acoustic band playing the post-punk, alt rock clubs. He’s never worried about being anything other than himself and he’s humble and let’s his songwriting speak for itself. His social activism is smart and fearless. I’ve often wondered how this shy soft spoken Wisconsin dude could have made his way down to Georgia and created one the most profound and influential Southern punk records ever to hit the streets, Scarred but Smarter.

He’s got the spirit and he’s got the poetry, and I believe he is divinely ordained to bring us the truth and the songs.”

The Georgia Music Foundation, a non-profit organization, has awarded nearly $600,000 in Georgia Music Grants since the first “Georgia On My Mind” in 2014.

Music editor for Nashville.com. Jerry Holthouse is a content writer, songwriter and a graphic designer. He owns and runs Holthouse Creative, a full service creative agency. He is an avid outdoorsman and a lover of everything music. You can contact him at JerryHolthouse@Nashville.com
Previous LISTEN: Randy Houser’s “Still That Cowboy”
Next WATCH: Cody Jinks’ “Hurt You”