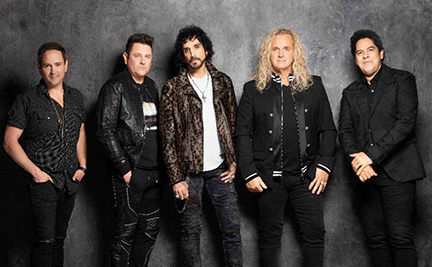 “I am so excited to finally release the project that we worked on in 2020, during a worldwide pandemic. It was a wonderful, and much-needed, distraction for all of us. We stumbled onto some magic and I am so proud to partner with Frontiers on this and for the world to hear what we’ve done. Any fans of Chicago, Journey, or Rascal Flatts will find something in this record that will resonate with them. To make some music with my friends and heroes is a truly incredible thing,” says Jay Demarcus.

“”I know that the band is very excited to have partnered with Frontiers on this first release from Generation Radio. I have a personal great feeling about it, having brought Frontiers to Chicago to release our 36th album “Now: Chicago XXXVI”, of which I produced and co-wrote the title track. We have a beautiful history together, so it only made sense to bring Frontiers into any of my ongoing projects. We are booking live dates as we speak and are already talking about getting started on the next record,” adds Jason Scheff.

Generation Radio’s debut is scheduled for release this summer.

Music editor for Nashville.com. Jerry Holthouse is a content writer, songwriter and a graphic designer. He owns and runs Holthouse Creative, a full service creative agency. He is an avid outdoorsman and a lover of everything music. You can contact him at JerryHolthouse@Nashville.com
Previous Craig Morgan Announces “God, Family, Country Tour 2022”
Next Annual Rock ‘N Jock Celebrity Softball Game June 6