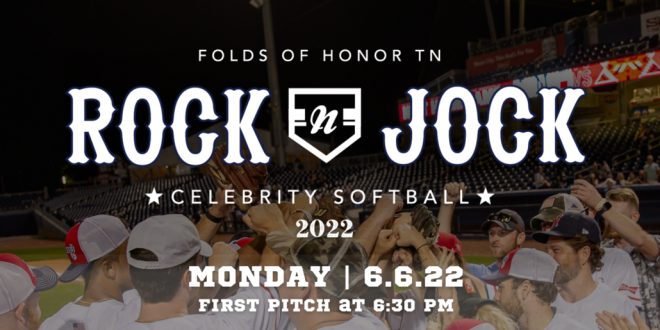 The Folds of Honor Tennessee 2nd Annual Rock ‘N Jock Celebrity Softball Game at First Horizon Park on June 6 at 6:30pm has sold over 450 tickets in only a week. With all proceeds going toward the families of America’s fallen and injured service members, the event is one of Folds of Honor Tennessee’s most anticipated nights of the year. Tickets are selling fast, click here to get yours now.

The star-studded event began with Lieutenant Colonel Dan Rooney’s flight home from his second tour of duty in Iraq. An F-16 fighter pilot in the Oklahoma Air National Guard, he became painfully aware of the realities families face when a loved one in uniform is fallen or disabled. As his flight landed, the pilot announced they carried the remains of Corporal Brock Bucklin on board. Lt. Colonel Rooney watched as Corporal Bucklin’s twin brother walked somberly alongside the flag-covered casket to meet his family on the tarmac. Among them was the deceased Corporal’s young son, Jacob. Since that night, Lt Col Rooney has committed his life – through the Folds of Honor – to provide scholarships to spouses and children of America’s fallen and disabled service members. Jacob Bucklin became the first Folds of Honor scholarship recipient in 2007.event is one you won’t want to miss and you can reserve your seat for only $19 + fees. Click here for more information.

See below for the full list of celebrities you can expect to see playing a competitive game of softball at Rock ‘N Jock 2022.

Music editor for Nashville.com. Jerry Holthouse is a content writer, songwriter and a graphic designer. He owns and runs Holthouse Creative, a full service creative agency. He is an avid outdoorsman and a lover of everything music. You can contact him at JerryHolthouse@Nashville.com
Previous Generation Radio Signs With Frontiers Records
Next CMA Fest Hosts Fitness Fundraiser