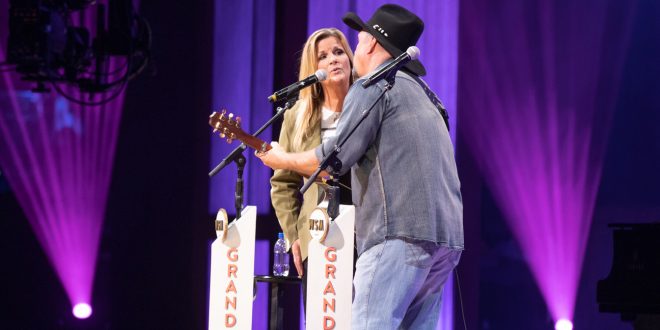 Opry members Garth Brooks and Trisha Yearwood stepped into the circle tonight bringing millions of fans from all around the world together for the Grand Ole Opry’s 4,922nd consecutive Saturday night broadcast. In addition to performing their own hits, the couple performed favorites from other giants in country music including Merle Haggard, George Strait, and Emmylou Harris, to name just a few. The two dueted on the George Jones/Tammy Wynette classic “Golden Ring” and also on their own “Whiskey To Wine.” The night marked the 10th anniversary of the Opry House having flooded in the Tennessee floods of 2010.

“I just love being here,” Brooks began. “This stage holds so many memories for both of us.”

“When you walk in this building, there’s such a history here,” Yearwood added. Then when you walk into this circle, there’s something magic that happens. I’m honored to be here with you.”

“I’m honored to be here with you,” Brooks replied.

“Thanks to the Opry for letting us be members of the greatest place on the planet,” Brooks added later in the show before later sharing, “In every challenge there is an opportunity. We are together apart, and apart we are together … in country music we are a family and we will all get through this and come out stronger in the end.”

The pair ended their performances with Brooks’ “The Dance” fading into Yearwood’s acapella version of the standard “Sweet Dreams.”

Brooks and Yearwood helped the Opry keep the music playing for another Saturday night broadcast keeping a 95-year tradition alive even amidst the current COVID crisis. The Grand Ole Opry was broadcast live on Circle, and Gray TV stations, DISH Studio Channel 102, Sling TV and other TV affiliates in addition to a companion live stream on Circle All Access and the artists’ Facebook pages. TV and radio personality Bobby Bones hosted the Circle telecast, while Mike Terry served as radio announcer for those tuned in to 650 AM WSM and SiriusXM Satellite Radio.

Embracing today’s technology, the Opry was broadcast and streamed with a very small production team. The show’s artists performed acoustically.

With Nashvillians at home under Nashville Mayor John Cooper’s “Safer at Home” order and live shows paused at the Grand Ole Opry to help reduce the spread of COVID-19, this Saturday’s performance once again took place without a live audience. Grand Ole Opry management has worked closely with the Nashville’s Director of Health to bring the show live to millions around the world while following strict safety protocols under the guidance of local health professionals.

Music editor for Nashville.com. Jerry Holthouse is a content writer, songwriter and a graphic designer. He owns and runs Holthouse Creative, a full service creative agency. He is an avid outdoorsman and a lover of everything music. You can contact him at JerryHolthouse@Nashville.com
Previous Tim McGraw Set To Release “I Called Mama”
Next King Calaway Teams Up With The Shires For “The Climb”