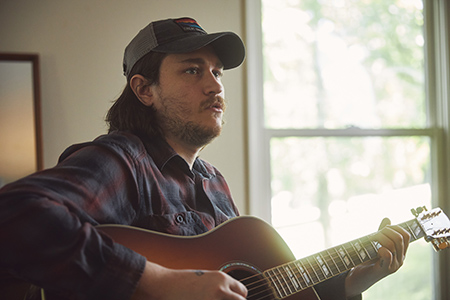 Nashville native, Braison Cyrus will perform a socially distanced, outdoor performance at The Outdoor Music City Wine Garden at City Winery on Thursday, October 15. Tickets are free but must be claimed in advance to observe capacity restrictions.

Influenced by The Band, Neil Young, Bright Eyes, My Morning Jacket, Fleet Foxes, and Band of Horses, Braison debuted his first single, “I’ll Never Leave You” in 2018, performed on The Tonight Show with Jimmy Fallon, and toured theaters across the country. In August, Braison quietly uploaded a b-side that prompted Billboard to note, “the sprawling, slightly spacey “Glass Between Us’ showcases Cyrus’ range.”

Braison released his 2nd official single, “Heart Is Gold,” in September, pairing it with an animated video that brings the artwork of visual collaborator, Rob France, to life.

Cyrus has also contributed his version of Woody Guthrie’s “This Land Is Your Land” for the Patagonia documentary, Public Trust: The Fight For American’s Public Land. Covering Guthrie is hallowed ground for any songwriter but especially Braison, whose passion for conservation and animal welfare began as a youth, growing up on a 500 acre Nashville farm. Currently, Braison Cyrus is recording his full-length album for release in 2021.

WHERE:      The Outdoor Music City Wine Garden at City Winery

Music editor for Nashville.com. Jerry Holthouse is a content writer, songwriter and a graphic designer. He owns and runs Holthouse Creative, a full service creative agency. He is an avid outdoorsman and a lover of everything music. You can contact him at JerryHolthouse@Nashville.com
Previous Grand Ole Opry Back To In-venue Audience Beginning October 3
Next Chase Martin Signs Deal With Records Nashville