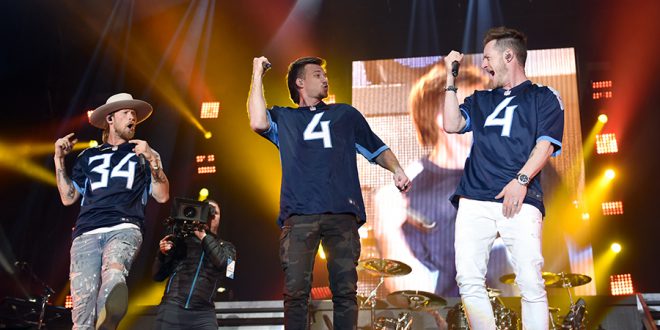 Proudly sporting the NFL’s Tennessee Titans’ brand new 2018 jerseys personalized with “Hubbard” and “Kelley,” Multi-Platinum duo Florida Georgia Line were in the zone showing downtown Nashville how they roll last night (4/4) at the corner of Broadway and 1st Avenue.

Hosted in celebration of the upcoming 20th season, star players of past and present united with the Titans Cheerleaders for the anything-goes festivities. “It was about as Nashville as you could get,” claimed ESPN, as a DJ and live Titans band pumped up the honky-tonk-lined street for the global entertainers. Even coach Mike Vrabel joined in on the action as he grabbed a mic to accompany FGL onstage for “Get Your Shine On.”

Palpable energy of the multi-block crowd fueled the first of its kind “Tradition Evolved” party as thousands of fans cheered and sang throughout the night to a range of FGL’s hottest jams from their BMLG Records albums. The dynamic pair mixed in new fan-favorites like their history-making chart-topper “Meant to Be” with Bebe Rexha – currently sitting at #1 on the Billboard’s Hot Country Songs chart for the 18th consecutive week (tying 4X PLATINUM-certified “H.O.L.Y.”) – and invited Country rising star Morgan Walden for a standout performance of his latest single “Up Down” (featuring FGL). And making it a family affair, both Tyler Hubbard and Brian Kelley sweetly brought out their wives for a piano-driven “H.O.L.Y.” – marking baby Olivia Hubbard’s first concert.

From the pre-party at FGL HOUSE to the after-party back at their four-story entertainment destination – plus the knockout concert complete with pyro and fireworks in between – headlining the landmark event meant a lot to the former Belmont University students who met in Music City. “It’s an honor to be a part of this organization,” Hubbard shared onstage. “It’s an honor to be in the beautiful city of Nashville – our home state of Tennessee right here – hanging out on a Wednesday night.”

Music editor for Nashville.com. Jerry Holthouse is a content writer, songwriter and a graphic designer. He owns and runs Holthouse Creative, a full service creative agency. He is an avid outdoorsman and a lover of everything music. You can contact him at JerryHolthouse@Nashville.com
Previous Night Two, Tin Pan South Songwriters Festival
Next Night Three: Tin Pan South Songwriters Festival