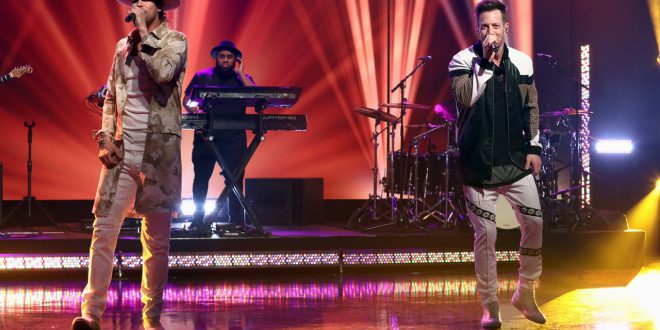 Reigning Billboard Music Awards Top Country Song (“H.O.L.Y.”) winners Florida Georgia Line will vie for the same category again this year with their double platinum-certified Bebe Rexha collaboration “Meant to Be.” The BMLG Records global entertainers are also up for Top Country Duo/Group Artist and Top Country Tour at the 2018 show, live from Las Vegas on May 20.

“Feeling extremely honored and thankful to have 3 nominations at the 2018 @bbmas! Love y’all,” FGL shared on Instagram.

Lighting up Country and Pop radio playlists, “Meant to Be” continues to obliterate records as FGL now has two of the three longest-leading #1s on the Billboard Hot Country Songs chart. Triumphing at the top spot for the 20th consecutive week, the smash is Top 5-and-climbing on the Billboard Hot 100 and has surpassed 784 million global streams to date. FGL’s Tyler Hubbard and Rexha penned the soaring anthem alongside Josh Miller and David Garcia.

FGL had a big 2017 supercharged with their 13th #1 “God, Your Mama, And Me” featuring Backstreet Boys; back-to-back headline runs (2017 Dig Your Roots Tour and The Smooth Tour 2017) featuring sold-out stadiums for the first-time on The Smooth Stadium Tour 2017 with Backstreet Boys, Nelly and Chris Lane; plus chart-jumping with all-star collaborators: Hailee Steinfeld and Alesso (“Let Me Go” featuring watt) and The Chainsmokers (“Last Day Alive”).

Next up, FGL will join rising Country star Morgan Wallen during his late-night debut on ABC’s Jimmy Kimmel Live! (11:35/10:35c) with the Top 15 single “Up Down” on April 26. They’ll race to Indio, CA, the next day (4/27) for their first-ever headlining slot at the annual Stagecoach festival.

Music editor for Nashville.com. Jerry Holthouse is a content writer, songwriter and a graphic designer. He owns and runs Holthouse Creative, a full service creative agency. He is an avid outdoorsman and a lover of everything music. You can contact him at JerryHolthouse@Nashville.com
Previous International Songwriting Competition Announces 2017 Winners
Next Americanafest Announces First Confirmed Performers