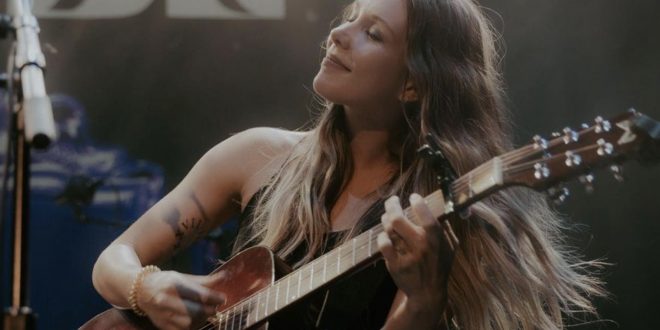 Singer-songwriter Bre Kennedy creates music soaked in rich storytelling with piercing pop sensibilities. For many years she wrote with other artists and for other artists, and now she is allowing her own music to take center stage. Influenced by mesmerizing talents like Brandi Carlile, Fleetwood Mac and Cat Power, her delicate, raspy sound soars. Throughout her music she touches on profound themes of life’s messy moments and self-growth. Kennedy reveals, “I usually try to have a smile when it comes to the wreckage of human existence. I really try to dance through the bullshit.”

Before the pandemic hit she had begun working on her debut album and during lockdown she found creative ways to keep that process going. Whether it was writing sessions through zoom calls or setting up a makeshift studio in a Blue Ridge Cabin and in her own apartment, she was able to work on the project all last year. Kennedy’s forthcoming debut album Note To Self is set to release this month. Each song was inspired by all her quarantine epiphanies, some good realizations and some ugly ones. She’s releasing six singles leading up to the record. Kennedy unveils her first single “Progress” April 22. The offering captures the sound of a new chapter in her life. “CTRL” is a single about feeling powerless over what is happening in the world today, which is something so many of us can relate to. “Nothing Compares” is a narration of how we are stuck on our phones comparing ourselves to others instead of tending to our own selves and gardens.

Raised by her single dad in a highly musical household, Kennedy grew up jamming out to greats like Tom Petty, Heart and Aretha Franklin. At 17 she moved to Los Angeles, feeling in her gut that LA wasn’t where she was meant to be. In 2015, she hopped in her Nissan and drove to Nashville where she really discovered her true musical identity. Waitressing by day and gigging at night, Kennedy was devoted to making her dream of a career in music a reality. Playing shows at prominent Nashville venues like The 5 Spot and The Basement, as her presence grew in the city’s music scene, she began releasing more of her own music and building residency, Kennedy admits, “I think it was a lot of searching for what kind of music I wanted to make and what I wanted to say as an artist and I think I found that in Nashville.”

After her buzzworthy hits like “Jealous of Birds” and “Twenty Something” landed her Spotify’s New Music Friday, many doors opened up. Opening for Sheryl Crow at Ryman Auditorium in Nashville and selling out her first headlining show at historical landmark Exit/In, she cemented her spot as one of the new voices out of the New Nashville music scene. Now with gigs placed on hold, she’s learned to really value playing live and what that has meant to her. In releasing her first-ever album, she tells the tale of her growing pains. Kennedy’s hope is that fans can grow alongside her, as she figures it all out in real-time with them.

Look for Kennedy Saturday, September 4 at the WHO STAGE on the Farm from 6:30 to 7:15pm

Music editor for Nashville.com. Jerry Holthouse is a content writer, songwriter and a graphic designer. He owns and runs Holthouse Creative, a full service creative agency. He is an avid outdoorsman and a lover of everything music. You can contact him at JerryHolthouse@Nashville.com
Previous LISTEN: Ray Fulcher’s “Girl in It”
Next Dennis Quaid Plays The City Winery Nov. 15