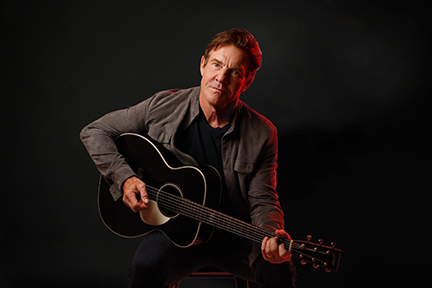 You know the actor Dennis Quaid but you may not know the talented singer/songwriter Dennis Quaid. Quaid hits the road this fall and takes his high energy show to venues around the country including The City Winery here in Nashville on Nov. 15.

Audiences will experience the musicality and passion for playing live that have earned Quaid rave reviews. A riveting performer, Quaid captivates the audiences with engaging stories about his illustrious film career and stories behind the highly personal songs that will populate his forthcoming inspirational album set for release in 2022 via Gaither/Primary Wave.

During Quaid’s lengthy shows, he covers some of his favorite songs from Jerry Lee Lewis as a tip of the hat to the “the Killer” who Quaid portrayed in the box office smash Great Balls of Fire!, displaying equal ease on the piano with rock ‘n’ roll classics as well as country standards with his acoustic guitar. Musically his shows encompass country and rock driven by his distinct vocals and anchored by his gift for telling compelling stories in his songwriting.

Though he loves writing, recording and making movies, the stage holds a special place in Quaid’s heart, and for the last four decades, he’s toured extensively earning the acclaimed actor a reputation as a respected touring artist.

Music editor for Nashville.com. Jerry Holthouse is a content writer, songwriter and a graphic designer. He owns and runs Holthouse Creative, a full service creative agency. He is an avid outdoorsman and a lover of everything music. You can contact him at JerryHolthouse@Nashville.com
Previous Featured Bonnaroo Artist: Bre Kennedy
Next WATCH: Luke Combs Debuts “Cold As You” Video