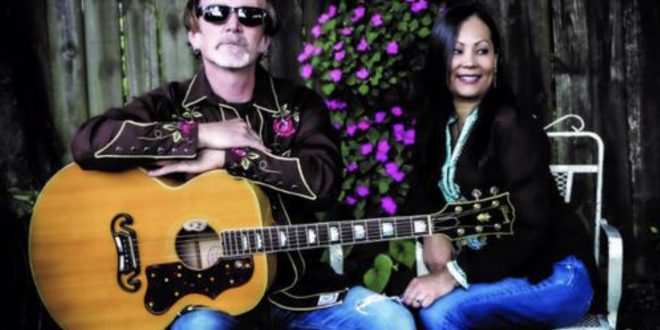 Fanny Grace has come a long way since playing on street corners all over the country. The duo, made up of Carmen Mejia and Paul Reeves, have shared the stage with some of music’s greatest artists like, John Anderson, Charlie Daniels, Steve Miller, The Allman Brothers, Willie Nelson and even opened for Merle Haggard at the Ryman Auditorium.

Their new album Don’t Want It All, But I Don’t Want Nothin’ will be released on October 11 and was produced by John Carter Cash at the CASH Cabin in Hendersonville, Tennessee and features “A Cowboy’s Last Ride” which was written by Johnny Cash, and is one of the only songs Johnny Cash wrote for a female to sing.

“I was cutting the guitar track for “Storms Are on the Ocean” on my J200; it’s about 30 years old, and still sounds pretty good. About halfway through John Carter stopped me and said, ‘wait, I think I have the perfect guitar for this.’ He came back from his guitar room with an old case, fragile as can be. It was AP Carter’s Martin guitar. It was over 100 years old. It had the most incredible sound. I looked up after the first pass and everyone had big smiles on their faces just listening to that guitar. 100-year-old song, played on a 100-year-old guitar,” Paul Reeves explained.

Keep your eye on Nashville.com for Fanny Grace tour news.

Music editor for Nashville.com. Jerry Holthouse is a content writer, songwriter and a graphic designer. He owns and runs Holthouse Creative, a full service creative agency. He is an avid outdoorsman and a lover of everything music. You can contact him at JerryHolthouse@Nashville.com
Previous Dan + Shay Arena Tour to Kick Off at Bridgestone Arena
Next Brantley Gilbert Celebrates Album Release With Free Concert For the USO