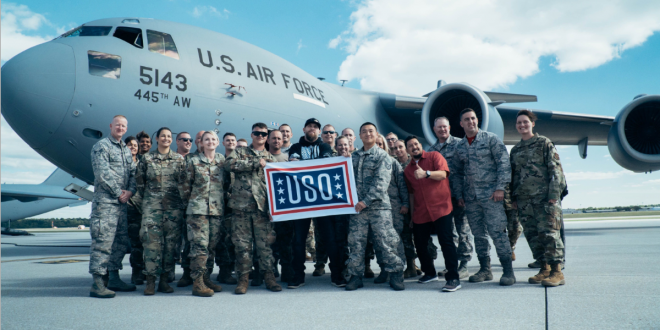 Brantley Gilbert celebrated the release of Fire & Brimstone on October 4 with the men and women on Wright-Patterson Air Force Base in Dayton, Ohio. Gilbert spent the day touring the base and meeting different units while learning about all they do for our country. Saying thank you the best way he knows how – Gilbert capped off the evening with a free concert with the USO for service members and their families at the WPAFB theater with an hour-plus long performance kicking off with “Kick It In The Sticks,” “What Happens In A Small Town” and ending with “Bottoms Up.”

His first release in nearly three years delivers Gilbert’s take on love, family, redemption and life in a small town. Like his previous four albums, all 15 tracks on Fire & Brimstone are either written or co-written by Gilbert.

Music editor for Nashville.com. Jerry Holthouse is a content writer, songwriter and a graphic designer. He owns and runs Holthouse Creative, a full service creative agency. He is an avid outdoorsman and a lover of everything music. You can contact him at JerryHolthouse@Nashville.com
Previous Fanny Grace Out With New Project Produced By John Carter Cash
Next WIN!!! 4-Day Passes To Tennessee Motorcycles And Music Revival