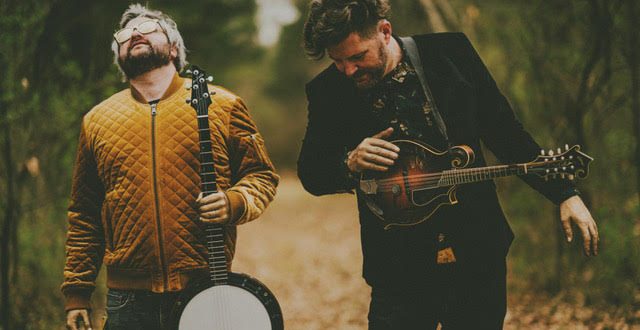 Nashville.com became huge Cadillac Sky fans when the progressive, edgy, bluegrass band hit the music world back in 2002. We also became Bryan Simpson and Matt Menefee fans, two of the cofounders of the band in the process. The band produced three albums but decided to go their separate ways in 2011. “What a time, what a time, what a time. But this is something new. Only a fool would attempt to resurrect that matchstick skyscraper. This has its own panache. But one thing hasn’t changed. Matt Menefee is right by my side, and I by his.” says Simpson. Simpson and Menefee worked on various projects the past eight years together and separately but are now back together as a duo, The Golden Age.

Nashville.com is proud to premiere the first video from this project. “If Rifles Shot Roses.” The video was shot live and on location at Nashville Beard and Barber around one mike just as it was recorded around one mike at The Sound Emporium. “We didn’t want to hide behind any effects or any edit buttons.” said Simpson. The song was written by Simpson and Matt Jenkins and The Golden Age have 12 songs recorded with plans to do a full album after a little momentum builds.

Simpson’s song writing prowess speaks for itself with cuts by Tim McGraw, Blake Shelton, Billy Currington, George Strait, Jason Aldean, Joe Nichols and many more.  Menefee is among the top banjo players in the world and together this is bound to be good. Keep checking Nashville.com to see what’s next from The Golden Age.

Music editor for Nashville.com. Jerry Holthouse is a content writer, songwriter and a graphic designer. He owns and runs Holthouse Creative, a full service creative agency. He is an avid outdoorsman and a lover of everything music. You can contact him at JerryHolthouse@Nashville.com
Previous Charlie Daniels‘ “The Devil Went Down to Georgia” Turns 40
Next Lil Nas X Releases ”Old Town Road” Video Featuring Billy Ray Cyrus