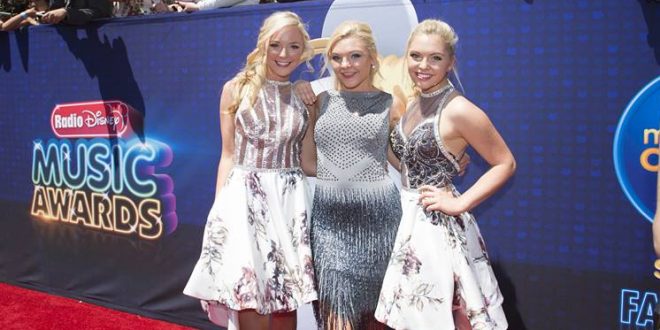 Tell me about your current single, “Living Like That.” Did you write the song? What was your inspiration?
Actually “Living Like That” was written by one of our very good friends here in Nashville and it basically has a really good message that we wanted to release at the beginning of 2017, talking about living life to the fullest and letting your hair down and not letting any obstacles get in your way.

Did you work with any outside writers on the Southern Halo CD?
We did. We actually have great friends of ours who are based in Nashville, Catt Gravitt, Gerald O’Brien, and Kye Fleming, so we had lots of fun. And Kelsea Ballerini!

Tell me about your background and how the band came to be? Were you parents musicians?
No! They are actually not musically talented at all, but we always grew up listening to Fleetwood Mac, a lot of classics, and blues music. We defiantly grew up wanting to do what they were doing. We are from the Mississippi Delta where Blues music started, so we have such a strong love for music and we wanted to know how to play it. In 2014 we discovered our love for country music and we made it to the finals of the Texaco competition and got to play at the Ryman. Ever since that one night on stage we were like, ‘we want to do this.’

Ok..now for a couple of food questions!

What’s your favorite place to go for ice cream in Nashville?
That’s a really hard one because they’re all good. We like Mike’s, Mike’s is just the best, you can’t go wrong with it.

What’s your favorite place for breakfast in Nashville?
It’s hard, it’s between Kitchen Notes at the Omni, they have the best buffet, but then there’s The Southern.

And back to business…

How do the audiences differ from the UK to the US? I understand you are traveling back to Europe to perform in June & October.
It’s a huge, huge difference. Americans are rowdy, we want to party and socialize with each other, so when you’re playing either a small festival or a small gig, people tend to just hang out while there is background music playing. But in Europe, they hear your one single, will buy your album, and will listen to every song on the album. We went over there for the first time and every show was sold out! Everyone knew every single word to songs that weren’t even singles and they were just watching us. They love country music over there.