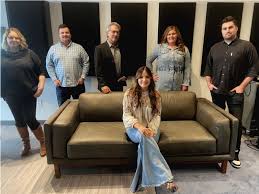 “It’s not often you get to work with artists who have honed in on who they are and what they’re trying to say through their music,” says ONErpm’s A&R representative Jeff Tobias. “Brit is a one of a kind artist who is creating undeniably standout music that will continue to wow audiences everywhere.”

ONErpm fulfills artist label services from a traditional record label structure to distribution and everything in between, leveraging proprietary technology, marketing, analytics and localized support to over 300,000 artists, music labels and video creators worldwide. They are one of the world’s largest YouTube Multi Channel Networks (MCN) specializing in music. In 2020, ONErpm is currently celebrating its 10th anniversary. Nearly 300 employees internationally, including those at in-house label arm Verge Records in Nashville, play a crucial role in fostering the careers of thousands of artists around the globe.

Taylor simply captures life and pain with poetic ease and plain honesty. She writes and sings about what she lives, what she knows. The record – a reminder itself that an album can tell a story – is mindfully crafted to capture Taylor’s pure authenticity and her Eastern Kentucky roots. By blending twangy guitars, crying steels, emotional lyrics and sultry vocals, Real Me redefines traditional country music. Not afraid to be influenced by the past she loves and adapt it to the future she is, the album – with its influences that include Bobby Gentry vibes, Loretta Lynn honky-tonk, Waylon and Willie waltzes, western swing and heart-tugging vocals – tells musical stories that manage to be dramatic, humorous, heartfelt and down-right honest.

Music editor for Nashville.com. Jerry Holthouse is a content writer, songwriter and a graphic designer. He owns and runs Holthouse Creative, a full service creative agency. He is an avid outdoorsman and a lover of everything music. You can contact him at JerryHolthouse@Nashville.com
Previous LISTEN: Barry Gibb Taps Nashville Talent For Latest Project
Next Country Legend Charley Pride Passes At 86