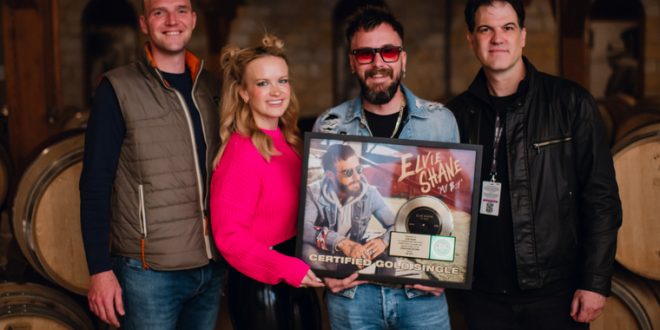 Wheelhouse Records singer/songwriter Elvie Shane is racking up another career milestone with the news that his recent No. 1 hit single “My Boy” has officially been certified GOLD by the RIAA, with more than 500,000 units of the song being consumed since its release. The lump-in-your-throat anthem to step-fatherhood just topped the charts at Country radio and continues to gain traction. Shane was surprised with the news of his GOLD certification during an interview with CMT Hot 20 Countdown, which fans can tune in to this Saturday and Sunday (11/6, 11/7) at 8/7am CT on CMT.

“Music isn’t just the noise we make,” shared Shane. “It is the people that consume it. This song isn’t just a song. It is a chapter out of my personal journey. A sincerest ‘Thank You’ to my listeners for giving my story a GOLD record.”

“My Boy” is taken from Shane’s just-released debut full length album Backslider, available now here. Shane co-wrote the set that embodies the crunchy hooks of Classic Rock, the nostalgia of Country music as well as the emotional electricity of Gospel and R&B. Critics have already been quick to praise the body of work:

Music editor for Nashville.com. Jerry Holthouse is a content writer, songwriter and a graphic designer. He owns and runs Holthouse Creative, a full service creative agency. He is an avid outdoorsman and a lover of everything music. You can contact him at JerryHolthouse@Nashville.com
Previous 55th Annual CMA Awards Announces More Performers
Next Nashville.com’s Favorite New Christmas Albums