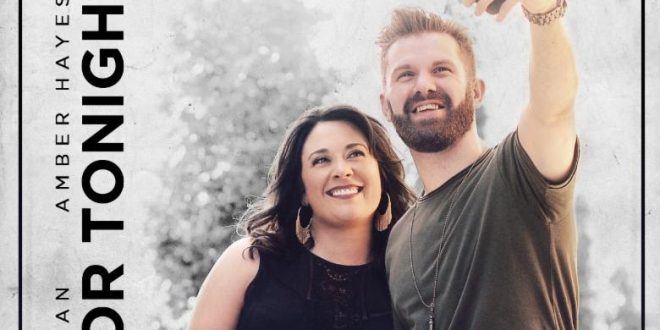 Fresh off the success of his first Top 50 single, Tipsy, dynamic country artist Nick Hickman is back with friend and fellow Bar Frog Music artist, Amber Hayes for a night they’ll never forget. The catchy summer anthem, Live ForTonight captures the carefree essence of living life in the moment, if even just for a night.

Live For Tonight is the second single from Hickman’s current album Let Em’ Speak and is officially on country radio today and available on iTunes and all digital retailers.

The idea came to Hickman after a night of contemplating the future with friends. “Why can’t we just live for the night and let the future come? I thought, ‘hey that is a cool concept.’” When it came time to record, Hayes was an easy choice. “I love Amber, she is such a great person and has incredible talent,” Hickman said. “She brings a great dynamic to the song and I think we blend together very well.” When approached with the project, Hayes was immediately excited about the experience. “After he sent me the song, I fell in love with it,” said Hayes.  “I thought this would be great adventure for us to team up on this song.”

With such a promising start to the summer, playing shows, hitting the road for radio tours and climbing the charts, Hickman hopes to continue to build on the success. “Tipsy was great for our team, so we felt we needed to keep the momentum going with an up-tempo song,” said Hickman. With very little downtime planned, Hickman and Hayes are looking forward to hitting the road together to promote the new single.

About Nick Hickman: At first glance Nick Hickman may appear to be just another mega-talented country heartthrob, but an invaluable work ethic and genuine love for entertaining distinguish him from the rest.  With musical influences including George Strait, Travis Tritt, Luke Bryan, Justin Timberlake, and The Fray, this Knoxville native combines a combination of powerful vocals, strong songwriting skills and an energetic performance that you do not want to miss. Since moving to Nashville in 2014, Hickman has evolved from strictly songwriter to well-rounded entertainer. “My job is to entertain. I give everything I have in order to do just that.” In the short time since the release of his debut EP in 2016, Hickman has spent countless hours perfecting his artistry through writing, touring, and recording. His determination and passion continue to drive himself, and all those around him, forward. It is a safe bet that Hickman won’t be slowing down anytime soon.

For more information, visit Nick Hickman at the following: