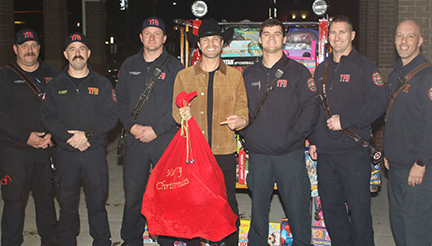 Handpicking his toys from Nashville’s Phillip’s Toy Mart, Lynch was further inspired to gift children in need of “Somethin’ That Makes You Smile,” as heard on his fifth studio album BLUE IN THE SKY. Capturing the heart of his shopping spree plus a surprise local visit to the Seacrest Studio in Monroe Carell Jr. Children’s Hospital at Vanderbilt, all toys purchased were donated to the Tullahoma Fire Department Toy Drive, Ryan Seacrest Foundation, and 147 TEAM.

Making history with his PLATINUM, six-week #1 collaboration “Thinking ‘Bout You (feat. MacKenzie Porter)” breaking records as the longest-running Top 10 single in Billboard Country Airplay chart history at 28 weeks, the smash hit also wraps the year on top as the #1 song on the Mediabase 2022 Year-End Chart Country and #2 on the Billboard Year-End Country Airplay Songs chart. In addition, Lynch secured himself in the Top 5 of Mediabase’s Most Played Artists Country Ranking.

Next month, Lynch returns for his seventh year at Luke Bryan’s Crash My Playa 2023. Serving as host and performer of Dustin Lynch’s Pool Party at Moon Palace Cancun on January 21. He’ll keep the momentum red-hot as support for Kane Brown’s DRUNK OR DREAMING TOUR in the spring.

Music editor for Nashville.com. Jerry Holthouse is a content writer, songwriter and a graphic designer. He owns and runs Holthouse Creative, a full service creative agency. He is an avid outdoorsman and a lover of everything music. You can contact him at JerryHolthouse@Nashville.com
Previous Craig Morgan Gives Back To The Troops
Next Miranda Lambert Helps Shelter Pets Over Holidays