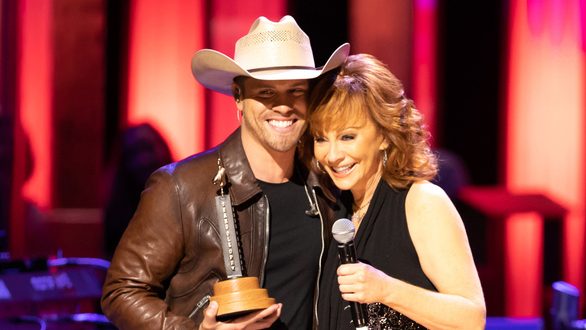 The Grand Ole Opry officially welcomed Dustin Lynch as a member of the Grand Ole Opry last night with the help of one of his mentors, Opry member Reba McEntire. Lynch made his Opry debut in 2012.

After Lynch had performed four of his hit singles, McEntire surprised him on stage, sharing, “We’re paving the way like Minnie, Roy, Porter, and all the greats before us paved the way for us. Congratulations and welcome to one of the best families in the world.”

Wiping away tears before McEntire returned to the stage with tissues, Lynch said, “I told everybody before I came out here I’m a crybaby, and I get it from my dad.” Thanking his friends, family, bandmates, and others who play a part in her career for sharing his dreams, he concluded, “This is one of those dreams right now. … Thank you for allowing us to live the dream.”

Backstage, Executive Vice President, BBR Group Jon Loba surprised Lynch with recognition of another career milestone, presenting the artist with a plaque certifying streams in excess of one billion.

Last month when Lynch was performing at the Opry, his friend and Opry member Trace Adkins walked out onstage and said, “We want people to be members of the Grand Ole Opry who will have a respect for this institution that it deserves, that it has earned for 92 years,” adding, “We think that Dustin Lynch is going to carry on in that proud tradition.”

Opry General Manager Sally Williams shared, “We are truly delighted to officially welcome Dustin into the Opry family. Since making his Opry debut, Dustin has forged a genuine, lasting relationship with the Opry’s members, staff, and audiences. He’s debuted would-be hits on our stage, while backstage he’s gotten to know some of his music heroes and helped welcome newcomers into the country music fold. As Dustin becomes our newest member tonight, we look forward to that relationship growing even stronger, and—as Trace Adkins noted when inviting Dustin to join the family last month—to Dustin carrying on the Opry’s proud tradition for decades to come.”

Music editor for Nashville.com. Jerry Holthouse is a content writer, songwriter and a graphic designer. He owns and runs Holthouse Creative, a full service creative agency. He is an avid outdoorsman and a lover of everything music. You can contact him at JerryHolthouse@Nashville.com
Previous Blue Rose Music Signs Bailey Ingle
Next Americanafest: Pound for Pound, The Best Music Festival There Is