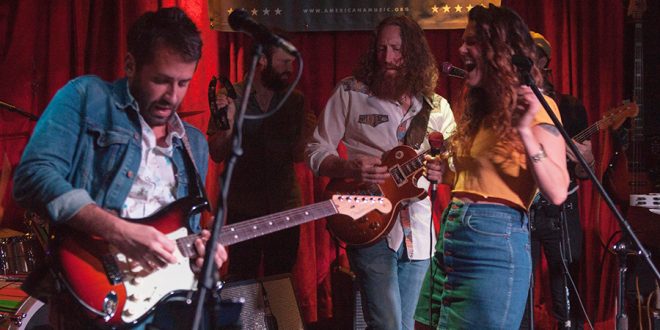 Lilly Hiatt and Los Colognes at The 5 Spot : Americanafest: Pound for Pound, The Best Music Festival There Is

Americanafest: Pound for Pound, The Best Music Festival There Is

Americanafest 2018 is in the books and as far as we’re concerned, is still the best deal going in music with the low price of $75 getting you access to most showcases over the course of the almost weeklong festival. The only bad thing about the festival is that it is impossible to see the almost 500 bands in the 40 or so venues around town. There’s also plenty of off campus events that are free or you can attend for a nominal fee. We found ourselves at many of these events over the course of the festival.

The 5 Spot in in East Nashville has become a favorite early evening and Tuesday night hang. After checking out the stellar John Prime show at the City Winery and the end of a free explosive Kyle Daniel set at Acme, we headed over for Derek Hoke’s weekly Two Dollar Tuesday event. During the rest of the year you are going to see Derek Hoke and guests play some excellent music for the low cover of $2 and enjoy some local Yazoo brewery $2 drafts. The last two years, in addition to Derek Hoke’s set, we have seen the excellent band Los Colognes lead a stellar line up of festival showcasing artists through classic albums. Last year we saw artists such as Lucas Nelson and Margo Price participate in a sublime performance of Neil Young’s “tonight’s the Night. This year it was Lily Hiatt and Lera Lynn amongst others.

We were back for a couple more regularly occurring events at the 5 Spot that cost the non-wristband holder a mere $5 or free.  On Thursday, it was local guitar slinger and producer Mark Robinson leading a crack ban through some crunchy blues tunes. Friday was the free Tim Carroll Rock and Roll Happy Hour.  Former Tin Machine-David Bowie and current Cure guitarist Reeves Gabrels joined Tim this week and they ripped through 2 hours of original rock tunes.

The Basement East, also in East Nashville had a couple great events where a $10 or $15 gained non- festival attendees entrance to a show led by House Band Whiskey Wolves of the West. Tim Jones and Leroy Powell led a group of a list performers through a couple superb music theme nights.  On Tuesday Night, It was the Better Together: Show Up and Sing Party, celebrating the artists who expand our minds through social commentary. East Nashville stalwarts Chuck Mead and Andrew Leahey sharing the hosting duties and welcomed guests such as Tim Easton, Will Hoge, Mary Gauthier, and Kevn and Tim from Drivin N Cryin.

Friday saw us back at the Beast for a Tribute to 1968 where the Whiskey Wolves of the West hosted artists performing an evening of songs from 1968.  Artists performing at his show included Ron Pope, The Cordovas, The Band of Heathens, Jason Eskridge, Emily West and Mike Farris.

Saturday afternoon found us at the Groove for the free Bootleg BBQ party where we enjoyed some free Lagunitas beer and music from some British artists that we were not familiar with. Highlights included the Wandering Hearts, Ida Mae, and non Brit Aaron Lee Tasjan who was joined by Brit, Yolo Carter for his set to perform a song they wrote together.

Next year if you are unsure of shelling out the $75 check out some of the low cost or free shows occurring across town all week.  We still recommend purchasing the wristband or conference badge to take in as much as this great festival has to offer.

Music editor for Nashville.com. Jerry Holthouse is a content writer, songwriter and a graphic designer. He owns and runs Holthouse Creative, a full service creative agency. He is an avid outdoorsman and a lover of everything music. You can contact him at JerryHolthouse@Nashville.com
Previous Dustin Lynch: Newest Member of the Grand Ole Opry
Next Opry Salute to Ray Charles