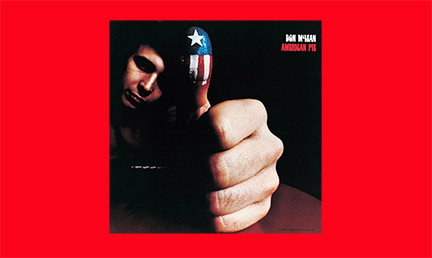 Don McLean’s 1971 masterpiece American Pie was released 50 years ago on October 24, 1971. The song “American Pie” went to #1 on the Billboard Hot 100 and spent 4 weeks at #1 in the first two months of 1972. The album also went to #1 for 3 consecutive weeks in January 1972. His many accolades include induction into the Songwriters’ Hall of Fame, his song was inducted into the Grammy Hall of Fame, and artists of all genres and generations have covered his songs including Madonna, Fred Astaire, Chet Atkins, “Weird Al” Yankovic, Elvis Presley, Josh Groban, and Perry Como. He recently received his star on the Hollywood Walk of Fame in Los Angeles, CA, and “American Pie” was featured in 2021’s Black Widow and FINCH.

“I can’t believe it’s 50 years to the day when ‘American Pie’ was released. They say time flies when you’re having fun and I guess that’s right. I’ve had a fabulous life in music and the arts and got to see the world all because of that wonderful album and the many that followed. All because of my loyal fan base throughout the world. All because of the many friends I have and the help they have given me,” remarks Don McLean.

Now, in celebration of the 50th Anniversary of American Pie, UMe has created an official lyric video with Don McLean. The lyrics are sourced from what Don considers the gospel, the original 1971 sheet music for the song down to the correct abbreviations and punctuation.

“This video is the first step in a promotion program by my label to celebrate the 50th Anniversary of the album and single American Pie. This promises to be a lot of fun and I look forward to everything they have planned. Thank you UM,” adds McLean.

Recorded at The Record Plant in the late spring of 1971, “American Pie” was issued as a double A-side single in November 1971 and charted within a month. Interest from the media and public sent the single to #1 in the U.S. and McLean to international superstardom. Every line of the song was analyzed time and time again to find the real meaning but McLean refused to acknowledge any of the interpretations, only adding to its mystery.

His second single, “Vincent”, charted on March 18, 1972, going on to reach #12 in the U.S and #1 in the U.K. The American Pie album remained at #1 in the U.K. for 7 weeks in 1972, and in the U.K. charts for 53 consecutive weeks. It contained not only the iconic chart-topping title cut but also the hit single “Vincent,” a tribute to artist Vincent van Gogh, that climbed to No. 12 on the Billboard Hot 100 and also topped the charts in the U.K.

American Pie was McLean’s second disc, following his 1970 debut Tapestry. But after the success of American Pie, Tapestry was reissued by United Artists and charted in the U.S. on February 12, 1972, reaching #111 and the top-15 in the United Kingdom; it includes two of McLean’s hits, “And I Love You So” and “Castles in the Air.”

A New York native, McLean went on to become one of the most revered and respected singer-songwriters of his generation. Future hits following “American Pie” included “Dreidel,” “Castles In The Air,” and “Wonderful Baby.” He also paid tribute to Roy Orbison’s influence with a 1980 hit recording of “Crying.”

Music editor for Nashville.com. Jerry Holthouse is a content writer, songwriter and a graphic designer. He owns and runs Holthouse Creative, a full service creative agency. He is an avid outdoorsman and a lover of everything music. You can contact him at JerryHolthouse@Nashville.com
Previous Josh Osborne Named ASCAP Country Music Songwriter Of The Year
Next 2021 CMA Award Winners