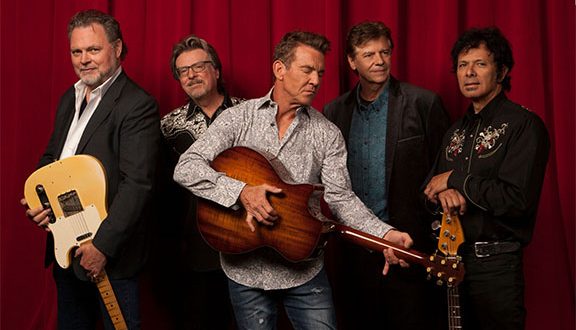 Dennis Quaid & The Sharks are celebrating Record Store Day by releasing their first-ever album, Out of the Box, on vinyl via Omnivore Records to record stores this Saturday, April 13. Described by Quaid as “a junkyard of American music,” the A-side includes the original title track “Out of the Box” while the B-side features a rousing cover of Larry Williams’ hit “Slow Down.”

Quaid, who is not only an accomplished actor, but also an artist with hundreds of thousands of miles under his belt as a touring musician, produced the project with the Kingbees’ Jamie James. Recorded at the legendary Village Studios in Los Angeles, the band’s debut album was released on CD and Digital last November to rave reviews.

Dennis Quaid & The Sharks have toured as often as Quaid’s schedule has allowed over their 19-year history. Following a packed performance at Billy Bob’s Texas, one reviewer noted how Quaid “rushed onto the stage like a 20-year-old, and leapt into the crowd with his guitar during the second song to share some high fives, all without missing a note on his six string (ILoveFTW.com).” On May 25, Dennis Quaid & The Sharks will open for Midland at their show in Westside Pavilion in Tuolumme, Calif. Quaid, the star of Midland’s forthcoming music video for “Mr. Lonely,” appeared with the Texas trio at the ACM Awards last weekend.

Among Quaid’s musical heroes are Buddy Holly, Hank Williams, Willie & Waylon, Johnny Cash, the Beatles, the Doors and James Brown. With influences like those, it’s no surprise that members of the Sharks have serious musical pedigrees of their own: Jamie James led the Kingbees; Sharks members Tom Mancillas, Ken Stange and Tom Walsh have worked over the years with artists as varied as Harry Dean Stanton, Roger Miller, Tina Turner, Joe Cocker, Supertramp, Jose Feliciano and America.

Music editor for Nashville.com. Jerry Holthouse is a content writer, songwriter and a graphic designer. He owns and runs Holthouse Creative, a full service creative agency. He is an avid outdoorsman and a lover of everything music. You can contact him at JerryHolthouse@Nashville.com
Previous Over One Billion Career Streams For Chris Lane
Next Gene Watson Celebrates Three Consecutive No. 1s