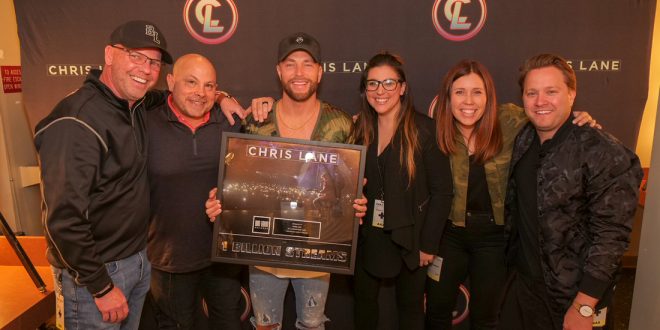 Over One Billion Career Streams For Chris Lane

Chris Lane has a lot to celebrate. The Big Loud Records artist has officially surpassed one billion career streams. To mark this milestone moment, his team surprised him with a plaque just before taking the stage in Seattle, WA, as direct support for Dan + Shay.

“I continue to be blown away by country music fans; you’ve shown up for me in such a big way and I wouldn’t be here without you,” said Lane. “Thanks for the support and thanks for loving the music. I love building this thing with y’all!”

Lane’s profile is on the rise with current single “I Don’t Know About You.” The adjoining music video has been viewed nearly 30 million times, claiming a place as Vevo’s most viewed Country video for multiple weeks. Directed by Justin Clough, the clip stars Lane on a mission to have a mystery girl answer the first question of the chorus – “What’s your name? What’s your sign? What’s your birthday?” Watch, and see the surprise twist ending above.

Notching 169 million streams already, “I Don’t Know About You” is Top 40-and-climbing at Country radio. Fans from coast to coast have been singing along to the song’s catchy lyrics (penned by Ashley Gorley, HARDY, Hunter Phelps, Jameson Rodgers) at Lane’s high-energy live shows. Now, he’s bringing the party to sold out crowds on DAN + SHAY THE TOUR with upcoming shows in Seattle, WA (4/12), Garden City, ID (4/13), Portland, OR (4/15) and Spokane, WA (4/16). He’ll continue on with the duo for a trek in Canada before a string of his own headline shows. Then, Lane will join Brad Paisley’s 2019 WORLD TOUR as direct support for a jam-packed summer and international dates in 7 European countries this fall.

Music editor for Nashville.com. Jerry Holthouse is a content writer, songwriter and a graphic designer. He owns and runs Holthouse Creative, a full service creative agency. He is an avid outdoorsman and a lover of everything music. You can contact him at JerryHolthouse@Nashville.com
Previous Billy Ray Cyrus Shares No. 1 Song With The Remix Of Lil Nas X’s “Old Town Road”
Next Dennis Quaid & The Sharks Release Their First-Ever Album