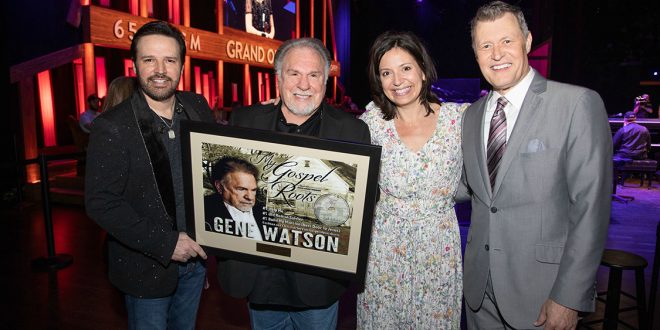 To commemorate three consecutive No. 1s on the Country Christian charts, Mark Wills surprised Gene Watson on stage at the Grand Ole Opry as he presented Watson with a plaque for his chart-topping accomplishments.

Gene Watson’s single “Build My Mansion (Next Door To Jesus)” ascends to the No. 1 position on the Cashbox Country Christian Chart and Christian Servant Magazine. Additionally, the single is currently in the Top 10 on SGNScoops Christian Magazine. The single features The Isaacs and is the third No. 1 single from his critically acclaimed Christian album, My Gospel Roots. The album is available on Watson’s website, iTunes and Amazon.

“To have three No. 1s in a row on the Gospel charts leaves me speechless. Really, there are no words to express how much it means to me,” said Watson. “I’m eternally grateful to my fans who have supported my Gospel music and I’m thankful for the Country Christian radio stations for playing my music. To have three No. 1 songs in a row is unheard of for me, and I can’t say thank you enough to everyone who helped make that happen.”

Watson is currently celebrating the 40th Anniversary of his hit “Farewell Party.” The track, recorded in one take and released as the second single off Watson’s album Reflections in 1979, soon became the country legend’s signature song. To celebrate the milestone anniversary, Watson has been hitting the road performing his catalogue of hits and fan-favorite songs, proving once again that he hasn’t lost a note in his incredible multi-octave range.

Music editor for Nashville.com. Jerry Holthouse is a content writer, songwriter and a graphic designer. He owns and runs Holthouse Creative, a full service creative agency. He is an avid outdoorsman and a lover of everything music. You can contact him at JerryHolthouse@Nashville.com
Previous Dennis Quaid & The Sharks Release Their First-Ever Album
Next Lucy Isabel’s “Rambling Stranger” Drops June 14