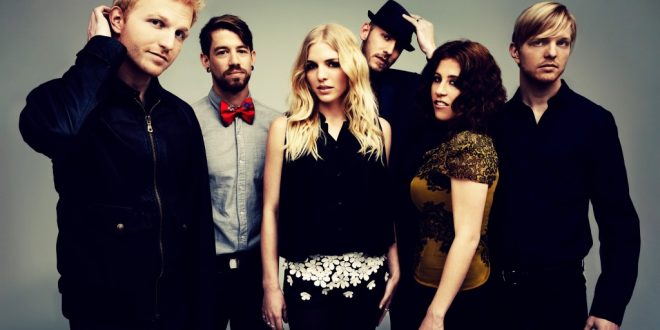 Delta Rae kicks off their 16-week residency at The Basement tonight in Nashville (1604 8th Ave S.) with Carrie Welling and Liz Longley taking the stage at 8:00P. They have been teasing a special guest for the evening who will make the lucky fans in the intimate crowd “Surrender.” Tickets for the show sold out online, prompting the band to open the doors for a limited number of $10 walkup guests.

The Delta Rae Revival will offer a new immersive experience from the moment fans arrive to the stage as audiences assemble every Wednesday from September 5 through December 19. This three-dimensional experience offers a palpable energy and dynamic rarely seen during concerts. More surprises are to come each week and will be announced throughout the next months over the band’s social media.

The wait is over for loyal supporters eager for new music. Leading up to their Music City celebration, Delta Rae has continued to create inside and outside the studio and today officially released “Do You Ever Dream?” to all digital partners. The song comes alive in an accompanying new video filmed in the band’s origin state of North Carolina and across the globe in Rekjavik, Iceland with director, Law. The stunning cinematic endeavor captures the complexity between two people whose relationship has fallen cold. Lead vocalist Brittany Holljes stars in the video portraying a dream-sequence visual depicting the reality of love lost and a yearning for more. She and her bandmate brother Eric Holljes (vocals, piano) produced this soul-stirring journey with Law that also features bandmates Liz Hopkins (lead vocals), Ian Holljes (vocals, guitar), Mike McKee (drums) and Grant Emerson (bass). Watch “Do You Ever Dream?” here and get the song digitally https://DeltaRae.lnk.to/DreamPR.

“One of my best friends from college is a genius filmmaker who directed our first music video for ‘Bottom of the River,'” expressed Eric. “He’s always wanted to shoot a video in Iceland, so we booked the cheapest tickets we could find, story-boarded on the flight, and traveled around the gravel roads eating salami and cheese sandwiches in a rental car, pulling over to shoot when we saw something beautiful. We wrote the song after Brittany’s break up with someone who didn’t share her imagination and vision for the future, and I think it was cathartic for her to finally tell that story. For me, it was one of the most creative experiences of my life and it has jumpstarted the next chapter for the band, which is proving to be our most ambitious and creative yet.”

Music editor for Nashville.com. Jerry Holthouse is a content writer, songwriter and a graphic designer. He owns and runs Holthouse Creative, a full service creative agency. He is an avid outdoorsman and a lover of everything music. You can contact him at JerryHolthouse@Nashville.com
Previous Hispanic Songwriters Celebration At The Bluebird
Next LOCASH Partners With Pepsi For Tailgate Tour