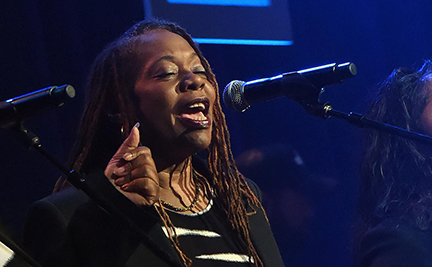 The McCrary Sisters shared the following on the loss of their sister, Deborah McCrary, yesterday, June 1, 2022: “It is with deep sorrow that we share the news of the passing of our beloved sister Deborah.”

Deborah Person McCrary, born June 17, 1954 (age 67), was a member of the legendary McCrary Sisters, who have performed on countless recordings, television shows and live performances including the Americana Music Association’s Honors & Awards, NARAS’s MusiCares, CMA, Country Music Hall of Fame and Museum, CMT, BET, SNL and more.
Deborah’s smile and foundational tones graced the stage with her sisters Ann, Regina and Alfreda on countless festivals in North America and Europe since 2011.
Deborah is the deep, low voice of the group. In her early teens, she sang in the multi Grammy-nominated BCM Mass Choir, and has performed “Everything Is Beautiful” with Ray Stevens at Madison Square Garden. She has performed with Elvis, and with Isaac Hayes on Dinah Shore’s TV show. Deborah spent most of her adult life working as a nurse before focusing on singing with her sisters.

The McCrary Sisters are an gospel music quartet from right here in Nashville, formed in 2010 by sisters Beverly McCrary, Deborah McCrary, Regina McCrary, and Alfreda McCrary. They have released four studio albums and one live album: Our Journey, All the Way, Let’s Go, Live and A Very McCrary Christmas.

Music editor for Nashville.com. Jerry Holthouse is a content writer, songwriter and a graphic designer. He owns and runs Holthouse Creative, a full service creative agency. He is an avid outdoorsman and a lover of everything music. You can contact him at JerryHolthouse@Nashville.com
Previous Billy Dean Returns With First Album In A Decade
Next Marcus King Announces Headline Tour With Nashville Stop