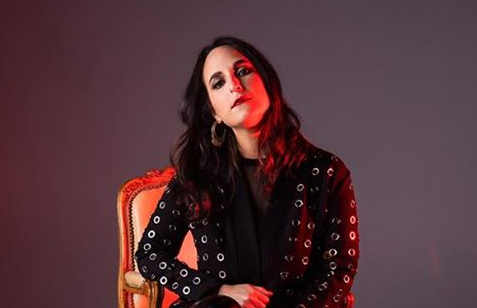 Singer-songwriter Dani Felt proves once again that Music City is not just Country Music City. The Philadelphia-born artist knew she had to be in Nashville and now she calls it home. The move means far more than greater opportunities in music – it’s also emblematic of a larger transition in Dani’s artistry. Singing has been a part of her life since the age of two, and she developed a love for musical theatre that would come to define her formative years. Her passion for Broadway coupled with a transformative summer camp songwriting class soon paved the way for Dani’s start as a singer-songwriter. She learned how to collaborate early on with co-writers since her voice has always been her only instrument, and soon gathered a handful of producers to help shape the pop/rock sound of her early releases, most of which were guitar-driven songs culled from her experience with romantic relationships. But like the title of her forthcoming single, which marks a stark shift in Dani’s musical direction, those days are “Gone”.

Felt is premiering the lyric video for her new single “Queen” right here on Nashville.com (above). Co-written by Invisible Heroes, “Queen” demonstrates Dani trading in her coffeehouse songwriter vibe for a more grown up sound. “With my new music, I wanted to embrace a different side of myself than the world has seen before, to step outside of my comfort zone,” she explains. On “Gone,” glossy synths glide under thunderous stomps and claps while Dani’s voice expertly flits between her warm croon and effortless falsetto. The production leans more EDM than Dani ever has before, but just when the chorus ends and the beat drops, a banjo plucks a twangy catchy riff, imbuing the song with a warm and organic element that recalls her early days. “Queen” is another departure, another forthcoming alternative/pop single that pulls no punches in its dark yet empowering message about women taking charge, both in the bedroom and in life. “‘Queen’ captures my alter-ego. I have always been seen as the nice girl, so I wanted to write a song that explores my own power and sends a message to men that women can be in charge.”

Dani is hard at work writing even more new material, so be on the lookout for future shows and more new music to come. Download “Queen” here.

Music editor for Nashville.com. Jerry Holthouse is a content writer, songwriter and a graphic designer. He owns and runs Holthouse Creative, a full service creative agency. He is an avid outdoorsman and a lover of everything music. You can contact him at JerryHolthouse@Nashville.com
Previous LISTEN: Brantley Gilbert’s New Single “Hard Days”
Next CMT Music Awards Nominations Announced