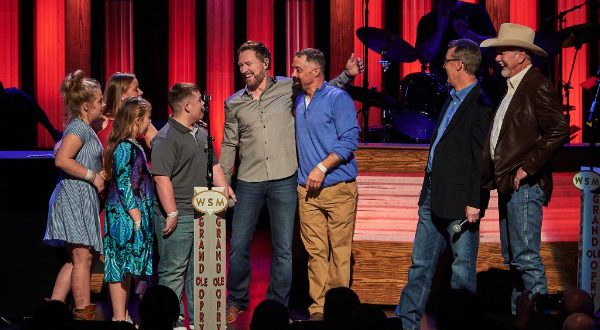 Country music entertainer, award-winning TV host and Army veteran Craig Morgan had a big surprise up his sleeve Friday (Feb. 23) at the Grand Ole Opry. During his performance, Morgan invited his long-time friend, U.S. Army SFC Josh Ferguson, a disabled veteran, and his family onto the stage and surprised them with the news they are receiving a custom-built, mortgage-free home this year in Dickson County (Tennessee) from Operation FINALLY HOME.  Joining Morgan onstage for the surprise was Operation FINALLY HOME founder Dan Wallrath and Executive Director Rusty Carroll.

“Josh and his family represent the true heroes of this country,” Morgan said. “I am proud to be part of Operation FINALLY HOME and thanks to the community in Dickson County, we are able to build my buddy, Josh, and his family a home that they so deserve.”

Morgan was named an Ambassador for Operation FINALLY HOME in 2017 after teaming with the organization in 2016 to surprise a military family with a mortgage-free home in Warsaw, Ind., during his “American Stories” tour. Operation FINALLY HOME provides homes and home modifications to America’s military Heroes and the widows of the fallen who have sacrificed so much to defend our freedoms and values.

“What a blessing to be able to be at the Grand Ole Opry with Craig Morgan and surprise U.S. Army SFC Josh Ferguson and his family with the news that we are working together to provide them with a mortgage-free home in Dickson County, Tennessee,” Rusty Carroll, Operation FINALLY HOME Executive Director said. “Josh has paid a hefty price protecting our country and we are honored to provide him a home.”

Ferguson served 20 years in the military. In 2007, his vehicle was hit by an explosively formed penetrator – a type of improved explosive device (IED). He sustained injuries which left him with an above the knee amputation, shrapnel pitted over his body, a surgically repaired leg, deteriorated hips, Traumatic Brain Injury (TBI), Post-Traumatic Stress Disorder (PTSD) and more. His injuries sent him to Walter Reed Medical Center where he spent several years to address the physical changes to his body. Joshua’s military career continued as a wounded warrior. His service in the Wounded Warrior Brigade fulfilled his need to serve his county.  Josh was honored with several awards such as the Purple Heart, Combat Action Badge, GWOT Service Medal, Iraq Campaign Medal and many more.

Josh was joined by his wife, Danny, and their three children. The groundbreaking for the home is scheduled later this year.