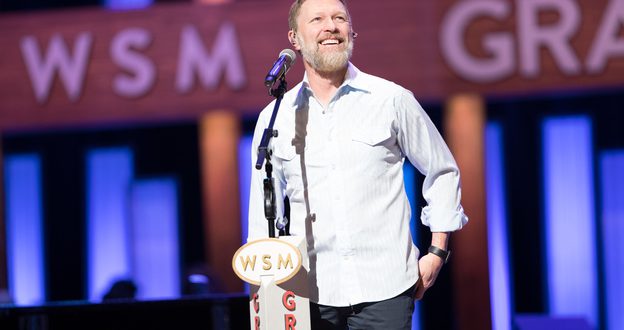 Craig Morgan on the Opry stage. Photo by Chris Hollo

Craig Morgan celebrated his 10thAnniversary as a Grand Ole Opry member with an appearance on the Opry last night at the Grand Ole Opry House performing some of his biggest hits including “Redneck Yacht Club,” “That’s What I Love About Sunday,” and a new song “Whiskey,” among others.

Morgan was inducted into the Opry family on October 25, 2008 by Opry member John Conlee who had also introduced and brought Morgan to the stage when he made his Opry debut on April 21, 2000. On his induction night 10 years ago, Conlee said “…it was plain to me that no one loves the Grand Ole Opry more than this young man right here. He loves it as much as he loves his country, and he’s proven that with his service to his country before.”

Morgan was invited by Conlee to become an Opry member during a special concert for U.S. troops at Fort Bragg in Fayetteville, North Carolina on September 18, 2008. That evening was a homecoming of sorts for the singer, who was stationed at Ft. Bragg from 1990 to 1992 during his ten-year active duty tenure in the US Army’s 82nd Airborne Division.

Last night, as Morgan stood on stage celebrating his 10th anniversary as a member of the Grand Ole Opry his love of country and ties to the military community were still evident as he asked all military veterans and members in the audience to stand, bringing one person from each branch of the United States Armed Services  (Army, Navy, Air Force, Marine Corp., Coast Guard) to the stage in the circle to the audience’s standing ovation.

Morgan closed his set with “International Harvester” and continued his celebration backstage with his family, friends and Opry family.

Coming to the Grand Ole Opry this month. On the heels of the Opry celebrating its 93rd birthday this past weekend with two back-to-back two star-packed nights and an Oct 6 Saturday night Opry partnering with American Red Cross to assist those affected in the Carolinas by Hurricane Florence, the Grand Ole Opry partners once again with St. Jude Children’s Research Hospital to celebrate Country Cares for St. Jude Kids during a special show Saturday, October 20 and includes superstar group Alabama. Throughout the show, photos and videos of inspirational moments from Country Cares for St. Jude Kids will be shared, and a St. Jude patient will take the stage as a special guest announcer for the night. The month at the Opry will end with the 10thAnniversary of Opry Goes Pink with Opry member and superstar Carrie Underwood, Anita Cochran, Ronnie Milsap and more raising awareness for the fight against breast cancer.

Music editor for Nashville.com. Jerry Holthouse is a content writer, songwriter and a graphic designer. He owns and runs Holthouse Creative, a full service creative agency. He is an avid outdoorsman and a lover of everything music. You can contact him at JerryHolthouse@Nashville.com
Previous Steelism Release Video For “Re-Member”
Next The Oak Ridge Boys Announce Christmas Tour