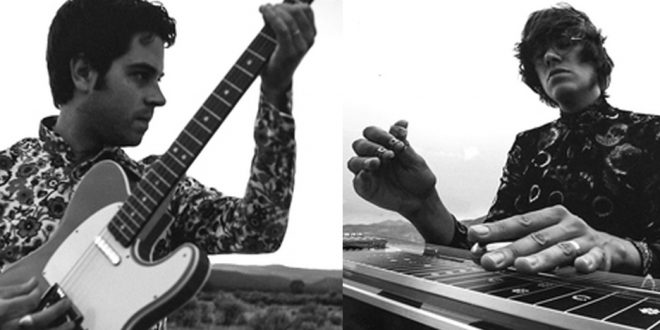 This month, the Nashville-based instrumental duo of guitarist Jeremy Fetzer and pedal steel player Spencer Cullum, together known as Steelism,  will hit the road continuing a national tour with Carl Broemel of My Morning Jacket.  The band are opening all shows and also performing as Broemel’s backing band. Find a full list of tour dates below.
In anticipation of the upcoming dates , Steelism have released a video (above) for “Re-Member” from their critically-acclaimed sophomore album ism .
“We knew ‘Re-Member’ needed a video where the visual landscape matched the sonic landscape, so we reached out to director David McClister,” explained Steelism guitarist Jeremy Fetzer. “He brought up the idea of shooting the video in New Mexico – it was the perfect nostalgic and psychedelic atmosphere for the song. ‘Re-Member’ was the first instrumental we recorded for ism and has become a regular part of our live set.”
“I had some locations in mind that I thought would make for interesting backdrops, and once there, I let the song, the performance, the location, and the weather dictate where I went from there – in the camera movement, framing, blocking, and the creative direction itself,” said director David McClister. “I like to work organically – with a plan, yes – but with the flexibility to let things go where they naturally want to go – and to follow them there (and coax them along a little if necessary). I can’t think of a better place to follow that approach than in the high desert of northern New Mexico.”

Music editor for Nashville.com. Jerry Holthouse is a content writer, songwriter and a graphic designer. He owns and runs Holthouse Creative, a full service creative agency. He is an avid outdoorsman and a lover of everything music. You can contact him at JerryHolthouse@Nashville.com
Previous Brandi Carlile and Sam Smith Team Up for “Party Of One”
Next Craig Morgan Celebrates 10 Years As Grand Ole Opry Member