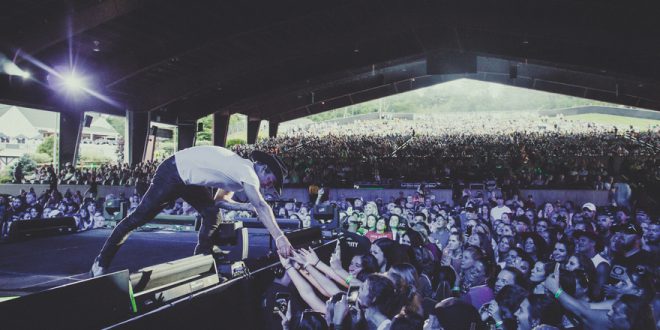 “Outskirts of Heaven” Hitmaker Closes Out The Summer With Huge Shows

A former keyboard player in Bryan’s band, the tour marks a full-circle moment for Campbell, who credits Bryan with convincing him to pursue his own career as a Country artist.

Campbell returned the favor with an energetic 30-minute set of traditionally-minded Country, pumping up the thousands-strong crowd for the night to come with stand-out tracks like “Fish,” “Outta My Head,” “Keep Them Kisses Comin’,” and new tune “Talk Country To Me,” plus his show-stealing, praised hit “Outskirts of Heaven.”

Still lifting spirits, “Outskirts of Heaven” continues to inspire a hushed sense of soul-stirring wonder in audiences around the world, showing all the marks of a career-defining single. Filled with ringing acoustic guitars, crying steel, and heartfelt vocals, the song describes Campbell’s love for the simple beauty of rural life, and his hope to find the same in the hereafter.

Critics and fans alike have connected strongly with the track, with Rolling Stone Country calling it “one of [2016]’s most faithfully Country songs” and Carrie Underwood proclaiming, “Craig Campbell, I love ‘Outskirts of Heaven!’ It makes me happy!!!” on Twitter.

Meanwhile, the Georgia native is working toward the release of his debut album for Red Bow Records (more details coming soon), and is just coming off a string of patriotic passion projects. Campbell performed a powerful rendition of “American Anthem” for the nationally-televised Macy’s 4th of July Fireworks score, and in December of 2016 embarked on a star-studded USO holiday tour with stops in Turkey, Quatar, Afghanistan, and Germany.

Here’s a complete list of CRAIG CAMPBELL’s upcoming appearances on the HUNTIN’, FISHIN’ AND LOVIN’ EVERY DAY TOUR:

ABOUT CRAIG CAMPBELL:
Campbell launched on to the Country music scene with the release of his self-titled debut album (2011), delivering the hits “Family Man,” “Fish,” and “When I Get It.” To date, he has logged five consecutive charted hits with over a billion radio airplay audience impressions and over a half million downloads. Acclaimed as one of the genre’s elite neo-traditionalist singers, his Top 15 breakout debut “Family Man” was featured on HBO’s True Blood and fan-favorite “Fish” has tallied nearly 400,000 digital copies sold. Campbell earned his first Top 10 smash with the infectious “Keep Them Kisses Comin’” from his sophomore album NEVER REGRET (2013). The gifted songwriter co-wrote Garth Brooks “All American Kid” off of MAN AGAINST THE MACHINE. Prior to landing his first record deal, the Lyons, GA, native spent time on the road playing keyboard for both Tracy Byrd and Luke Bryan – shows that inspired him nightly. He was soon discovered while playing a regular gig at the downtown Nashville honky-tonk, The Stage.