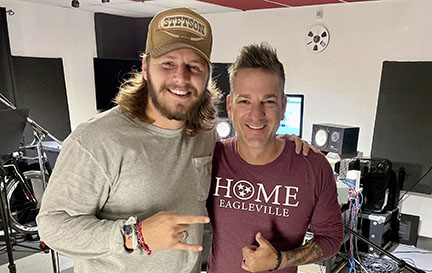 Craig Campbell’s “Outskirts of Heaven” has been one of his most in-demand songs since it was released in 2016, and the heartfelt tune recently had a resurgence in a very unique way. Several months ago, Craig discovered TikTok sensation Warren Zeiders performing the song in a stairwell – one of Zeiders’ favorite venues to record songs for his 1.5 million followers. The two eventually connected in person, and Zeiders asked Craig to produce and sing on a new version of the song for his Acoustic Covers (Deluxe) album. “Outskirts of Heaven” (feat. Craig Campbell) is available now at all streaming services and is already a Top 5 iTunes download.

“I was just scrolling through TikTok and heard this guy belting out an incredible version of my song,” said Craig. “I started checking out his music, and everything he sang just blew me away. I don’t care who sings this song, it just needs to be heard!”

Campbell wrote “Outskirts of Heaven” with Dave Turnbull, and it originally reached the Top 30 on the national country charts in 2017. Four years later, it continues to receive over 30,000 Spotify streams per day.

Pre-sale tickets are $20 in advance HERE or $25 at the door. Kids under 12 are admitted free. Gates open at 5 p.m., venue doors open at 6 p.m., and music starts at 7 p.m. The event will include a photo booth, holiday cocktails, fresh local baked goods and more.

Music editor for Nashville.com. Jerry Holthouse is a content writer, songwriter and a graphic designer. He owns and runs Holthouse Creative, a full service creative agency. He is an avid outdoorsman and a lover of everything music. You can contact him at JerryHolthouse@Nashville.com
Previous Randy Travis Celebrates 35 Years As Opry Member
Next John Rich Gets A Hat-Trick