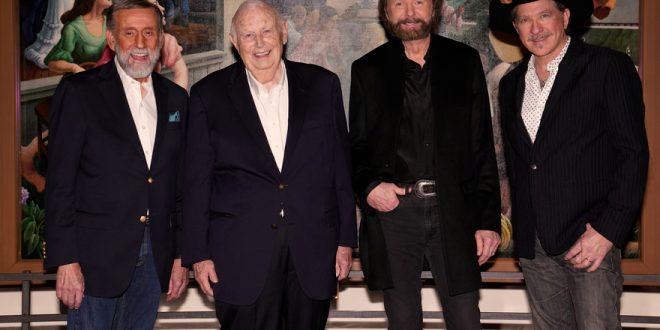 The Country Music Association held a press conference this morning to announce the 2019 inductees into the Country Music Hall of Fame – Jerry Bradley, Brooks & Dunn and Ray Stevens.

“One of my favorite days of the year is when I get to tell the new class they are being inducted into the Country Music Hall of Fame,” said Sarah Trahern, CMA Chief Executive Officer. “This is the highest achievement in Country Music, and I couldn’t be more thrilled to welcome Jerry, Brooks & Dunn and Ray into the distinguished group and honor this incredible career milestone.”

“It’s really hard to put into words how it feels to hear you’re going into the Country Music Hall of Fame,” said Kix Brooks. “When you’re a huge fan of Country Music, there’s nothing more humbling. My idols are on that wall in there – Hank Williams, Johnny Cash, Waylon Jennings – so to think that Ronnie and I are going to be placed beside those guys is probably one of the coolest things I could ever imagine happening. I’m not sure I’ll ever consider myself a peer because it’s not something that you think about…I just never even dreamed quite that big.”

“This means so much to us and I will be honored to accept it, but I still don’t think I’m ever gonna be able to believe it!” added Ronnie Dunn.

“I am surprised and emotional knowing that I’ll be joining my dad and uncle in the Hall,” expressed Bradley. “I was glad that Sarah Trahern and Tom Collins came to my house to bring me the good news.”

“I am seldom at a loss for words but when they told me I was going to be inducted into the Country Music Hall of Fame, I was thoroughly caught by surprise,” said Stevens. “What a great honor to be included in the company of the people who are already members. When I heard the news, I was speechless and all I can say is, ‘It don’t get no better than this!’”

A formal induction ceremony for Bradley, Brooks & Dunn and Stevens will take place at the Country Music Hall of Fame® and Museum in the CMA Theater later this year. Since 2007, the Museum’s Medallion Ceremony, an annual reunion of the Hall of Fame membership, has served as the official rite of induction for new members.

“This year’s class of inductees includes a visionary executive, a remarkable songwriter, producer, performer, and publisher, and the most-successful Country Music duo in history,” said Kyle Young, Country Music Hall of Fame and Museum Chief Executive Officer. “Jerry Bradley, Ray Stevens, and Brooks & Dunn have earned Country Music’s highest honor. It has been my privilege to watch and listen as they forged indelible marks.”

The press conference was hosted by WSM radio personality Bill Cody. The announcement was made in the rotunda of the Country Music Hall of Fame® and Museum in Nashville and livestreamed on CMA’s YouTube channel. Media assets are available for download at CMApress.com.

Music editor for Nashville.com. Jerry Holthouse is a content writer, songwriter and a graphic designer. He owns and runs Holthouse Creative, a full service creative agency. He is an avid outdoorsman and a lover of everything music. You can contact him at JerryHolthouse@Nashville.com
Previous Billy Ray Cyrus To Release “The SnakeDoctor”
Next Jerry Lee Lewis Transferred To Rehabilitation Center