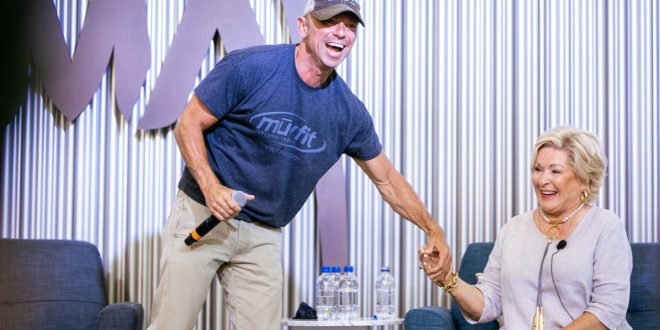 Iconic industry leader  Connie Bradley was surprised with the Country Music Association’s Irving Waugh Award of Excellence Tuesday, August 14 at CMA’s office. Presented by Blue Chair/Warner Music Nashville recording artist  Kenny Chesney and Sony/ATV Music Publishing President and Chief Executive Officer and CMA board member  Troy Tomlinson, the award recognizes her tremendous contributions to Country Music’s creative and business communities. Connie and  Jerry Bradley visited CMA to host a special Q&A session moderated by Country Aircheck Publisher and Chief Executive Officer Lon Helton about their lifetime careers for CMA board members and staff.
As he presented her award, Chesney spoke highly of his relationship with Bradley and shared memories of their friendship. Chesney knew the two would be good friends when she shared a story about stealing silverware during a visit to the White House. “I’ve been very blessed to have won Entertainer [of the Year] four times with this organization and one of the years that I won, I actually saw Connie standing in the audience, and I thanked her by saying she was one of the best friends that a dreamer could ever have. I meant that, and I still mean it, and I love you. And if you come to my house, please don’t steal the silverware.”
During the Q&A session, Connie Bradley shared stories about the early days of her career, including leaving the mortgage industry for a receptionist job at Channel 5. Her one question: “How much was I going to make?” Thankfully it was more than her previous job, so she gladly accepted. “I wasn’t good with math and numbers, but I was good with money,” she joked. Jerry Bradley shared stories about several artists he’s worked with, including one where Chet Atkins once told him he’d be a great music executive one day, to which the former RCA label head replied, “Hell, I don’t want to do that, you have to wear a coat and tie.”
Connie Bradley worked for more than three decades with ASCAP, rising to Senior Vice President and Nashville Head. Under her leadership, ASCAP signed and supported the careers of Dierks Bentley, Garth Brooks, Chesney, Rodney Crowell, Billy Currington, Alan Jackson, Reba McEntire, Brad Paisley, Kellie Pickler, Rascal Flatts, John Rich, George Strait and Chris Young, among many. Bradley served on the CMA Board of Directors from 1983 to 2012, having been elected both President and Chairperson.
The Irving Waugh Award of Excellence recognizes an individual who is the originator and caretaker of demonstrated ideas and actions that have dramatically broadened and improved Country Music’s influence on a national or international level for the benefit of the industry as a whole. The recipient’s ideas and actions typically run a course of years and have a proven historical impact on Country Music.

Music editor for Nashville.com. Jerry Holthouse is a content writer, songwriter and a graphic designer. He owns and runs Holthouse Creative, a full service creative agency. He is an avid outdoorsman and a lover of everything music. You can contact him at JerryHolthouse@Nashville.com
Previous Dueling Pianos For A Good Cause
Next Stephanie Urbina Jones’ “Tularosa” Drops Sept. 28