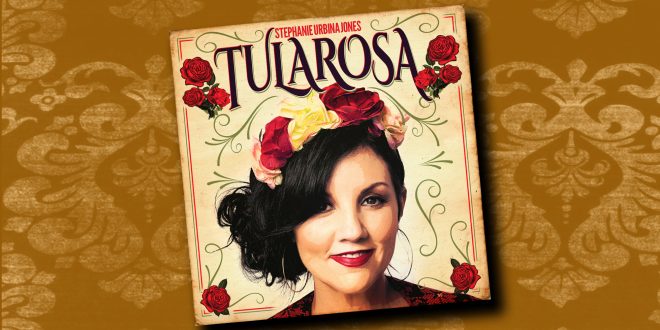 Nashville-based singer-songwriter Stephanie Urbina Jones learned long ago that her career is not entirely under her control. So many seemingly serendipitous moments have turned into dream-fulfilling opportunities, she’s convinced that God, fate, karma and/or other cosmic forces have been nudging her along. But the San Antonio native is still amazed whenever an apparently random event sets off a chain of tumbling dominoes like the one that resulted in Tularosa, the album she’s releasing Sept. 28 on Casa Del Rio Records/Soundly Music.

An inspired marriage of country classics and mariachi rhythms named for the place where it was recorded, Tularosa honors Urbina Jones’ musical icons — a string of legends from Dolly, Patsy, Willie and Merle to Johnny and June — and the Mexican heritage that feeds her sound and soul. It came together after Urbina Jones decided she wanted to add some spice to a radio-sponsored gig she was about to play in New Mexico. Her last-minute call for a local percussionist turned up a player who brought along his dad, a mariachi. It so happens that mariachi music accompanies some of her fondest childhood memories, and links her to the culture she’d finally embraced decades after her parents’ divorce had disconnected her from it.

But Urbina Jones and producer/guitarist Patterson Barrett would have headed back to Nashville with only memories if it hadn’t been for a concertgoer who approached her afterward. He told her she needed to record an album with mariachis — and offered to finance it with an inheritance he received from his recently departed mother.

“He felt it was important music to make to bridge the cultures and heal the divides between so many people’s hearts,” she explains. The amount, unfortunately, was well below what she knew the album would cost. But she also knew she couldn’t turn him down.

With the help of friends, the station, the studio and the players, they somehow made it work. But before they did, they had to figure out what to record. She and Barrett left with a promise to return, and no solid ideas — until they stopped to spend the night with friends in Lubbock. A guitar pull soon broke out.

“Patterson started playing ‘Walking After Midnight’ as a Latin cumbia,” Urbina Jones recalls. She used to sing that one back in her days at Austin’s Elephant Room, the jazz club where she first started performing, so she jumped right in. “It was so much fun, we spent the rest of the night trying out songs like Hank Williams’ ‘Cold Cold Heart’ as a mariachi waltz and Loretta Lynn’s ‘You Ain’t Woman Enough’ as a Mexican polka. In that living room, the inspiration for the album came together.”

Urbina Jones, Barrett and their band of mariachis from El Paso, Texas, and Tularosa, New Mexico deftly turn “You Ain’t Woman Enough (To Take My Man)” into a romp and Dolly Parton’s “Jolene” into an urgent drama. (“It feels like a telenovella,” Urbina Jones says.) She does “Ring of Fire” as a Spanish guitar-laced duet with famed Texas Tornado Augie Meyers; Barrett did the fine string arrangements sweetening the Doug Sahm/Tornados Tex-Mex standard “Is Anybody Goin’ To San Antone”; and the Lynn Anderson hit “Rose Garden” is simply elevated to a new level. And it all sounds so great — in English or Spanish; “Jolene” and “Ring of Fire” appear in both languages — it’s a wonder no one’s recorded an album like this before.

“The moment we started playing, we knew we were onto something,” Urbina Jones says. “It was hugely collaborative and spontaneous. We made music that translates culture, heart and soul — joining two worlds that have so much in common to celebrate.”

Urbina Jones had always wanted to record with mariachis, but had no idea it would happen when it did. That’s not surprising, considering most of her music career was equally unplanned. She started singing after getting a gig booking others at the Elephant Room; she landed a songwriting deal almost on a whim after relocating to Nashville to work with the Texas Tornados’ management agency. One of her first compositions became the title track of Lorrie Morgan’s Shakin’ Things Up album. A few years ago, another song she co-wrote, sung by The Voice’s season seven winner, debuted at No. 1 on the Billboardcountry chart. He got the previously unrecorded song from Blake Shelton, who’d sat on it for 15 years.

So yeah, Urbina Jones has learned to embrace the magic when she senses the wave of its proverbial wand. She even admits she sometimes feels a bit like Cinderella; she’s performed in 14 countries so far, including some of the world’s most prestigious festivals (among them Switzerland’s Montreux Jazz Fest and Japan’s Country Gold; she’s slated to return to Switzerland in October for the Country Night Grindelwald Festival). She’s also duetted with Willie Nelson and sung with The Time Jumpers (band of super elite players including country music icon Vince Gill), among other milestones.

And there’s more to come; that domino chain is still playing out. Urbina Jones is happy to follow where it leads, especially if it takes her to places like Tularosa.

Music editor for Nashville.com. Jerry Holthouse is a content writer, songwriter and a graphic designer. He owns and runs Holthouse Creative, a full service creative agency. He is an avid outdoorsman and a lover of everything music. You can contact him at JerryHolthouse@Nashville.com
Previous Connie Bradley Receives Country Music Association’s Irving Waugh Award of Excellence
Next Dylan Scott Lands In The Top 10 With “Hooked”