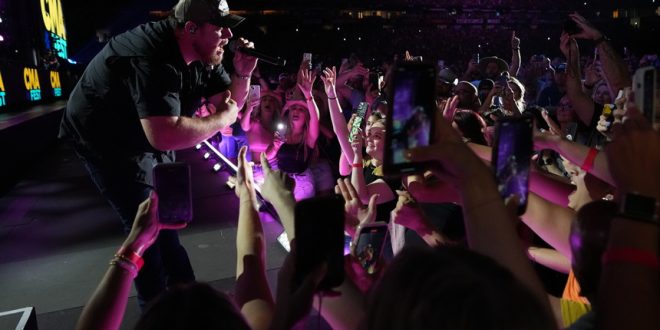 CMA Fest marked its big return to Nashville this past weekend (June 9-12), following a two-year postponement due to the pandemic.

“We did it! It had been 1099 days since we last kicked off CMA Fest (in 2019), and to finally be here feels incredible!” says Sarah Trahern, CMA Chief Executive Officer. “So many emotions have gone through my head this week, but I think gratitude sums it up best. Seeing the fans return to Nashville or visit us for the very first time is so heartwarming, and welcoming back our artists and the music community after two difficult years means so much. It truly takes a village to pull off this event—thank you to all of our partners within Nashville and beyond for helping us bring CMA Fest back!”

There were more than 80,000 estimated attendees from all 50 states and a record-breaking 39 foreign countries as they filled Music City in anticipation of seeing more than 260 acts taking part in CMA Fest. Officially kicking off on Thursday morning with reigning CMA New Artist of the Year Jimmie Allen taking the Chevy Riverfront Stage, CMA Fest brought an eclectic mix of music to downtown Nashville throughout the entire weekend. In addition to the Chevy Riverfront Stage, free outdoor daytime activity included performances at the Dr Pepper Amp Stage, Chevy Vibes Stage and Maui Jim Reverb Stage. Fans also experienced one-of-a-kind programming at Fan Fair X inside Music City Center, along with several brand activations and partners that took over Lower Broadway.

Fans also packed the house at Nissan Stadium every night and in true CMA Fest tradition, there was no shortage of surprise collaborations. Kicking things off on Thursday night was Darius Rucker joining Zac Brown Band to a fan rousing performance of “Chicken Fried.” Zac Brown Band also brought out two special guests—Marcus King for “Stubborn Pride” and King Calaway for “When I Get Home.” Dustin Lynch and MacKenzie Porter brought the energy way up with a performance of “Thinking ‘Bout You.” Taking the stadium stage on Friday night, for the first time since 2015, Wynonna Judd joined reigning CMA Female Vocalist of the Year Carly Pearce for a touching rendition of “Why Not Me” that brought the fans to their feet. Cole Swindell also welcomed Lainey Wilson for an electric performance of “Never Say Never.” Fan reaction was deafening in the house on Sunday night as well, when Billy Ray Cyrus took the stage alongside Dierks Bentley for “Achy Breaky Heart,” followed by Elle King stepping in with Bentley during “Devil Went Down To Georgia.” Elle King also hit the stage to perform “Ex’s and Oh’s” with Ashley McBryde. Additional surprises included Lady A bringing BRELAND out for a heartwarming performance of “Need You Now,” while Russell Dickerson was joined by Jake Scott for “She Likes It.”

Other Nissan Stadium highlights throughout the weekend included Luke Bryan lighting up the house during a touching performance of “Drink A Beer,” followed by fan favorites “Knockin’ Boots” and “Country Girl (Shake it for Me).” Keith Urban brought fans to their feet during “Days Go By” and “Wasted Time.” Luke Combs brought the house down with “Beer Never Broke My Heart.” Old Dominion performed “Chattahoochee” as a tribute to Country Music Hall of Famer Alan Jackson and capped their set with a rousing version of “I Was On A Boat That Day.” Fans danced in their seats during Jason Aldean’s “Dirt Road Anthem,” Kane Brown’s “One Mississippi” and Thomas Rhett’s “T-Shirt.” Brothers Osborne brought large dancing skeletons onstage during their energetic performance of “All Night,” closing with the upbeat anthem “It Ain’t My Fault.” Carrie Underwood’s soulful performance of “Jesus, Take The Wheel” took fans to church when she transitioned the song into “How Great Thou Art.” Fans leapt to their feet, singing along to Gabby Barrett’s “I Hope,” Kelsea Ballerini’s “Half Of My Hometown” and Parker McCollum’s “To Be Loved By You.”

This year, CMA Fest welcomed ten students from CMA Foundation Music Teacher of Excellence, Danielle Leigh Taylor’s music class at Nashville’s Mt. View Elementary School for a heartwarming performance of Jimmie Allen’s song “Best Shot.” The group performed alongside Allen on the CMA Close Up Stage on Thursday as a part of Allen’s panel, “My Voice Is A Trumpet: A Reading and Conversation with Jimmie Allen and Cody Alan,” which was centered around Allen’s children’s book, “My Voice Is A Trumpet.” Additionally, Chattanooga High School Center for Creative Arts students of 2020 Music Teacher of Excellence Neshawn Calloway, took the stage with CMA Foundation Artist Ambassador Filmore on the Dr Pepper Amp Stage at Ascend Park on Sunday to perform Filmore’s song “Other Girl.”

On Thursday morning at the Chevy Riverfront Stage, Jewelry Television (JTV), the national jewelry retailer and broadcast network presented the CMA Foundation with a check for more than $172,000. The donation comes as a result of JTV’s Back the Beat campaign, which ran from Oct. 1 through Nov. 15, 2021, and centered around a commemorative keychain sold exclusively by JTV to benefit the CMA Foundation. CMA Foundation Artist Ambassadors Jimmie Allen and Lindsay Ell, alongside CMA CEO Sarah Trahern and CMA Foundation Executive Director, Tiffany Kerns accepted the donation from Tim Engle, JTV Executive Advisor to digital commerce on behalf of the Foundation.

Music editor for Nashville.com. Jerry Holthouse is a content writer, songwriter and a graphic designer. He owns and runs Holthouse Creative, a full service creative agency. He is an avid outdoorsman and a lover of everything music. You can contact him at JerryHolthouse@Nashville.com
Previous Big Kenny And Kyle Petty Return To Circle Network
Next Featured Bonnaroo Artist: Whiskey Myers