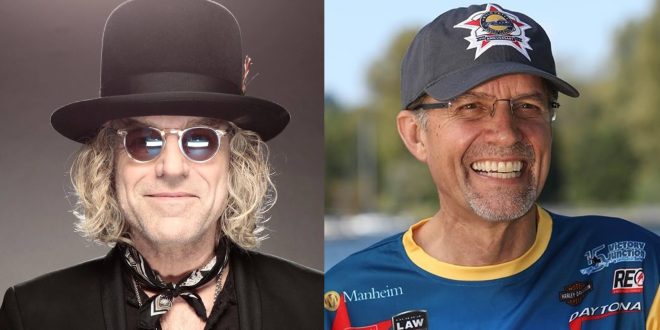 “Big Kenny’s Crank It Up Garage“ and “Dinner Drive with Kyle Petty” are coming back for a second season on Circle Network. The two series are both set to premiere on Thursday, June 16 at 9pm/8pm CT and 9:30pm/8:30pm CT respectively. Big Kenny of country group Big & Rich fame is back following his hit season one premiere with a front-row look into the wildest motorized builds and the stories behind them. NASCAR legend Kyle Petty will bring his viewers one-on-one conversations with some of his favorite athletes and musicians from around the nation as they take a drive and share stories over dinner.

“Dinner Drive with Kyle Petty” will feature 12 30-minute episodes with guests from sports and entertainment hand-selected by NASCAR driver Kyle Petty himself. Each guest takes Kyle for a spin in a special car to one of their favorite local restaurants. This year, Petty will visit Olympian Shawn Johnson and her husband Andrew East, World Series baseball champion Chipper Jones, musicians John Oates and Lyle Lovett, NASCAR legend Jeff Gordon, and more. The premiere episode will air on Thursday, June 16 at 9/8c pm.

Circle Network will also debut season two of “Big Kenny’s Crank It Up Garage,” a series following Big & Rich’s Big Kenny as he travels the country to discover some of the most mind-blowing vintage automobiles alongside his wingman, Charlie Pennachio. Big Kenny will kick off season two in California, exploring the iconic Glamis Dune Buggy. Kenny and Charlie will travel through Arizona, Nevada and Florida checking out new inventions before wrapping up the season in their home of Nashville, a total of 12 30-minute episodes. Season two premieres Thursday, June 16 at 9:30/8:30c pm, following “Dinner Drive.” “Getting a chance to meet some great creators is always an adventure me and Charlie P are ready for. Filming Season 2 of Crank it up Garage on Circle was pure fun and can’t wait for everyone to see what we got into!” said Big Kenny.

“After successful premiere seasons of both ‘Dinner Drive with Kyle Petty’ and ‘Big Kenny’s Crank It Up Garage,’ we’re really excited to bring our viewers a fresh season of both shows,” said Evan Haiman, SVP of Content at Circle Network. “Circle viewers that are fans of everything from NASCAR to country music will find an episode that’s right up their alley.”

Music editor for Nashville.com. Jerry Holthouse is a content writer, songwriter and a graphic designer. He owns and runs Holthouse Creative, a full service creative agency. He is an avid outdoorsman and a lover of everything music. You can contact him at JerryHolthouse@Nashville.com
Previous Jason Aldean Celebrates Three Weeks On Top Of The Charts
Next CMA Fest Wraps Up After 2 Year Postponement