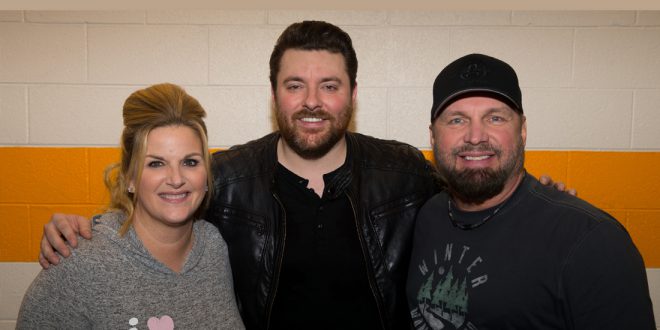 In a remarkable year full of career milestones, Chris Young counts his induction as the newest member of the Grand Ole Opry at the top of his bucket list. After joining Jason Aldean as special guest on his “They Don’t Know Tour” throughout 2017, Chris played his final show of the year on Saturday night (12/16), surprising a sold-out hometown crowd at Nashville’s Bridgestone Arena with an acoustic performance before reigning CMA Entertainer of the Year, Garth Brooks, took the stage.

The banner year included the release of his highly anticipated seventh studio album, Losing Sleep, his third record in less than two years and second consecutive studio album to debut at No. 1 on Billboard’s Top Country Albums Chart. Earlier this month, the title track from Chris’ chart-topping album was officially certified GOLD by the RIAA, hitting the 500,000-unit mark of combined sales and streams. The song, currently at #6 Mediabase / #9 Billboard and climbing on the country radio charts, marks the 32-year old Grammy nominated singer/songwriter’s 17th Gold/Platinum certification.

In addition to the success of the new project, Chris hit another career milestone in 2017, celebrating his 9th No. 1 and Gold single “Sober Saturday Night” featuring Vince Gill, from his ACM Album of the Year nominated 5th record, I’m Comin’ Over. The RCA Records Nashville artist also earned RIAA Platinum certifications for his acclaimed album Neon and Grammy nominated single “Think Of You” with Cassadee Pope.

“This year has been such an emotional one for me on so many levels.  All I can say is that I am grateful,” says Chris. “Thank you to country music fans, my friends at radio and in the industry, and the Opry.  I feel so blessed.”

While Chris is a native of Tennessee, his Texas roots run deep and he was one of the first celebrities to launch efforts to aid those impacted by Hurricane Harvey. Young seeded and raised more than $395,000 in a GoFundMe campaign in addition to partnering withKYGO/Denver to load two semis with supplies to aid recovery.

Chris is looking forward to big things in 2018, kicking off the new year headlining the “Chris Young Losing Sleep 2018 World Tour” starting January 11 in Indianapolis. For tickets visit chrisyoungcountry.com. On March 9, the Country Music Hall of Fame® and Museum will unveil the exhibition American Currents: The Music of 2017, including memorabilia from Chris’ noteworthy year.